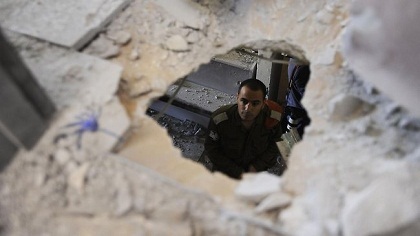 The Israeli army committed a clear violation of the laws of war when it killed 12 Palestinians, including women and children, in an air strike on a Gaza home last month, Human Rights Watch charged on Friday.

The raid, carried out during Israel's eight-day Operation Pillar of Defense, was on the home of a family whose father, Mohammed Jamal al-Dallu, 29, the Israelis described as a "known terrorist".

The strike, the deadliest during the conflict that ended on November 22, killed Dallu, a member of the Hamas police force, nine members of his family and two neighbors, said HRW.

"Even if Dallu, a low-ranking police officer, was a legitimate military target under the laws of war, the likelihood that the attack on a civilian home would have killed large numbers of civilians made it unlawfully disproportionate," it said.

The strike drew international condemnation, with many observers particularly shocked by the deaths of children.

The Israeli military originally said the strike had targeted a Hamas member responsible for firing rockets into Israel, Yehia Rabea, without saying whether he was inside the Dallu building.

But army spokeswoman Avital Leibovich later told AFP he "was a known terror operative affiliated with the military wing of Hamas".

In its statement on Friday, the New York-based HRW said the Israeli forces dropped what appeared to have been a "large aerial bomb" on the three-story home.

"Israel needs to explain why it bombed this house filled with civilians," said Fred Abrahams, a special adviser at HRW who conducted research in Gaza. "Anyone who violated the law should be appropriately punished."

The Israeli military said on Friday that its intelligence had identified the Dallu home as "the hideout of a senior Hamas militant who played an important role in the organization’s rocket-launching infrastructure".

"While the loss of life on both sides is regrettable, responsibility ultimately lies with terror operatives who render the civilian population a human shield by using civilian buildings as hideouts or weapon depots," it said.

It pledged to provide a "full response" to the HRW report in the coming days.

During the conflict, 174 Palestinians were killed -- including more than 100 civilians, among them at least 37 children and 14 women -- and six Israelis, two soldiers and four civilians including a woman, according to the two sides.

Oh and the Hamas rocket which killed 3 civilians in a house in Kiryat Malachi was not a war crime of the same degree?

Israel should ignore such complaints.....very predictable