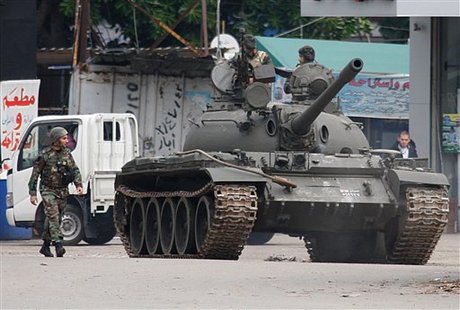 Army units continued their deployment in the northern city of Tripoli on Friday as they requested the residents to cooperate with them in informing them of any suspicious activity in the area.

The Army Command had described the last round of fighting on Thursday night as the worst the city had seen in years.

It added that its units were deploying in the neighborhoods of Jabal Mohsen, Bab al-Tabbaneh, and others that had witnessed clashes.

It is seeking to contain any armed presence in the city and restore calm and stability in Tripoli, added the statement.

But despite the army's measures, clashes and sniper activity renewed as night fell on the northern city.

The Army Command revealed that it had raided on Thursday night the resting places of various gunmen involved in the fighting, succeeding in arresting a number of suspects and seizing several weapons and military equipment.

In addition, it said that some army centers were subject to sniper attacks, which wounded seven soldiers and caused material damage to some military vehicles.

The soldiers' injuries are not serious, it stressed.

It urged the residents of Tripoli “to cooperate fully with the army”, warning them of the possibility of the gunmen of using them as human shields.

Tripoli had witnessed its fiercest night of fighting in years along the Bab al-Tabbaneh, Qobberh, Jabal Mohsen, Rifa, al-Baqqar, and Mankoubin neighborhoods.

The time to disarm everyone in Lebanon has come!

AMEN to that! But Iran's servants aka HA will never lay down their arms. They think they are above the law and anyone dare cross their path will be killed......and in the name of 'their' God!

Disarm everyone. Period. End of story!

Violence in Tripoli is just more destabilization by the Future Movement. Hariri needs the distraction from the Saqr debacle, his arming of the salafist jihad in Syria, the recruitment of naive salafists from Triploi and his failure to topple the government of M8.

Hariri's position of strength after Oct 19 has now deteriorated markedly with even his M14 allies in disarray over the Saqr tapes, Saqr's prideful admission and then recent embarrassing about-face.

Hariri has proven to be using his Lebanese connections to further his ambitions to the detriment of Lebanon itself. One can only wonder what Hariri will do next. Hariri's grand plans to march into Beirut victorious and reclaim his fathers legacy are in tatters.

mckinl
really! what a bunch of crap!

he is so too the point, it hurts, doesnt it?

Although I usually agree with you, I don't here. There are obviously serious games being played that go much farther up than the street.

How is Saqr an asset? At the very least he has proven to be a liar. What Sakr is, is a liability and a great embarrassment.

As far as being far fetched I'm only looking at the facts of the matter. It is clear that Hariri's moves have back fired.

A resolved situation in Syria will be good for all of Lebanon including the current government. Their greatest divide is Syria.

Once the Syrian civil war is over the Assad card will be gone eliminating an ongoing threat and the bogeyman play.

Then it will be Iran vs. NATO-Saudi factions. We all know who will eventually prevail necessitating HA moving to "normalize" its' functions.

what ever. Just need to take the arms from every one. Why can't the state disarm every body in Tripoli? Guess what. Khizbullah and Syrian does not allow the Lebanese army to do so.

Where all these weapons coming from......

Do not understand the word (Army deployment..) they always do this after each fight and for strange reason the army deploys again in Syria street...Where do they disappear after their deployment??And why don't they carry out surgical operation in both sides?These two areas are threatening the Lebanese national security and should be dealt with once and for all.

Ur worried about Syria's sovereignty?? They have been breaching ours for years!! They've killed our leaders,beaten our students,occupied our country, stolen our money,armed our militias! Shame on u

The poor M8 thugs can't stand it that their master in encircled in Damascus with no escape. Defectors from the army daily, bases falling nearly every day now. The airport is suut down.

Their answer ir to start a fight for Bashar in Tripoli, maybe on the request from Bashar and now the Hezz too. The Hezz are engaged in a battlefield loss of epic proportions. They will spin it and propagandize it on Manar and Orange. But it is a huge loss.

Now they are spinning the propaganda that one minister and harriri from outside the country are completely responsible for the loss of their master. The FSA with virtually no help are defeating the "invincible" Syrian army and Hezz.

The Alawite in Tripoli are trying in vail to start a new front for Bashar and the Hezz. It won't work. Bashar is done. The landscape is going to change. The Persian axis is being chopped to pieces. Even Hamas has publically rejected Bashar and the Hezz.

i love it how you guys always turn things upside down. did Sakr taught you how to do that?

The civil war in lebanon is inevitable. After the fall of bashar the rebellion of the lebanese against the hizbustan government will start.

after the fall of bashar, syria will be in such a disarray, that nothing will change in lebanon. read more, open your mind.

free mind, the sunni's will think they own lebanon after the fall of bashar.. and u wait and see whats gonna happen..

this round in tripoli will not end like the usual..it is narrowly related to the battle in damascus..perhaps some diehard brains will not agree,but with the coming weeks they'll think again.
N.B. rifaat ali eid, is not now in jabal mohsen,he is in the U.S.A. buying a house for his relatives,it's bad luck for the guys who die in the last days of the fiesta.

I am happy that our Army is acting responsibly, otherwise the lebanese civil war would have started already.
Thank you our soldiers for your sacrifice .

i repeat and repeat:
tripoli is not anymore under the influence of the lebanese sphere( practically hizb alla),it is directly linked to the syrian conflict...in other term it is the first front on lebanese territory between FSA and hizb alla.
CAN U HANDLE THE TRUTH.

The army needs to stop "deploying" and "urging people", how many times have we seen that?

It needs to shoot thugs on sight and go grab them inside their homes. The rest is commentary and ta2 7anak.

The time has come to send in the tanks and crush the opposition. He who opposes the army opposes the Government of Lebanon, and deserves either to get killed in the fighting or spend a long time in jail if he is lucky enough to be captured alive.
If the army does this in one place of ressurection then others will think twice before picking up arms against the state.