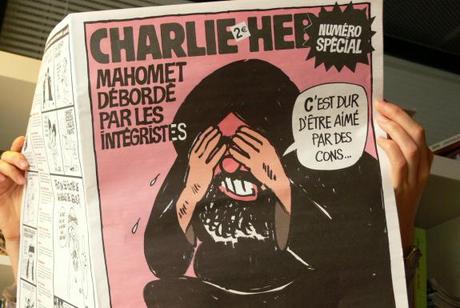 Two French Muslim groups have filed a lawsuit for inciting racial hatred and slander against a French satirical weekly that published cartoons of a naked Prophet Mohammed, the paper's lawyer said Friday.

Charlie Hebdo published the cartoons in September as often violent -- and sometimes deadly -- protests were taking place in several countries over a low-budget film made in the United States that insults the prophet.

The Algerian Democratic Rally for Peace and Progress (RDAP) and its offshoot the United Arab Organization (OAU), which both state that their goal is "the defense and support of Muslim and/or Arab people", are seeking damages of 780,000 euros ($1 million).

Their suit targets the publication, its director and two cartoonists.

Two other groups have already filed suits against Charlie Hebdo over the same series of cartoons. The most recent suits say they besmirched the honor of the prophet and of Muslims.

"Yet again, they are trying to scare us to prevent us continuing this French humoristic tradition regarding religion," said the weekly's lawyer Richard Malka.

In 2008, the then-director of Charlie Hebdo, Philippe Val, was cleared after French Muslim groups took him to court accusing him of having insulted Islam by publishing cartoons of the prophet.

An appeals court in Paris ruled that he had not insulted Muslims because the cartoons were aimed clearly at Islamist extremists and not the Muslim community as a whole.

In November 2011 Charlie Hebdo caused further offense when it published an edition "guest-edited" by the Prophet Mohammed that it called Sharia (Islamic law) Hebdo. The magazine's offices in Paris were subsequently fire-bombed.

I don't know, I mean I obviously believe that there is no need to go crazy if someone insults your religion and there is no need to kill people for that, but, why insult people's religion? It's become too unsophisticated to have a religious belief in the world, but I read once that if God was proven to not exist, the atheists would the most bothered.

Protect Freedom of Speech. Groups like these already opress people in their home countries, don't let them drag Europe down to their low ignorant level.

Freedom of Speech should be protected but that doesn't mean that insulting religions or races should be tolerated...