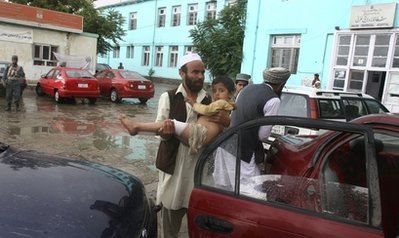 The suicide bomber who tried to assassinate Afghanistan's spy chief detonated a bomb hidden in his underwear, the intelligence agency said Friday.

Asadullah Khalid, who heads the National Directorate of Security (NDS), was targeted by a bomber posing as a Taliban peace envoy in a spy agency guesthouse in the upscale Kabul district of Taimani on Thursday.

Khalid was wounded in the attack and is now being treated at a U.S.-run military hospital outside Kabul where he is in a stable condition, security sources have said.

On Friday, the NDS said that he was "recovering" and in a "satisfactory" condition.

Investigators found that "the organizers of this suicide attack... skilfully placed the explosives in the underpants and around the genitals of the suicide attacker," the spy agency said in a statement.

This "runs against all Islamic and Afghani principles", it added.

It is believed to be the first time in Afghanistan that a suicide bomber has carried the explosives in his underpants. The tactic was made notorious on Christmas Day 2009 by an al-Qaida agent who tried to blow up an American airliner.

Nigerian Umar Farouk Abdulmutallab, who was caught while trying to detonate the plastic explosives aboard a flight from Amsterdam to the U.S., is serving life imprisonment.

His capture led to even stricter searches in some airports, including scanners which show victims in the nude.

The fact that an assassin was able to get so close to one of Afghanistan's most prominent officials had raised questions about whether the visitor was an insider known to Khalid.

But the revelation that the explosives were hidden in his underpants could also suggest that he might not have been thoroughly searched on that part of his body -- an omission in many security searches in Afghanistan.

Khalid is being treated for his wounds in a U.S.-run military hospital at Bagram airbase near Kabul after emergency surgery and blood transfusions at an NDS medical facility.

"We can confirm that he has been moved to the hospital at Bagram," a spokesman for NATO's International Security Assistance Force said.

Bagram, around 60 kilometers (35 miles) north of Kabul, is a huge airbase run by U.S. troops based in Afghanistan as part of the NATO mission.

Khalid has been visited by President Hamid Karzai, signaling his importance in the fight against the Taliban as NATO forces prepare to withdraw in 2014.

Some officials said Khalid was seriously wounded in the stomach and the head, but surgeons told the president that Khalid's injuries were not life-threatening.

The Taliban named the attacker in a statement as "hero mujahid Hafiz Mohammad".

Last year, the head of Afghanistan's High Peace Council, Burhanuddin Rabbani, was assassinated by a bomber posing as a Taliban peace envoy with explosives in his turban.

Khalid, known for being a fierce anti-Taliban figure and close to Karzai, had only been in the job for a couple of months before Thursday's attack.