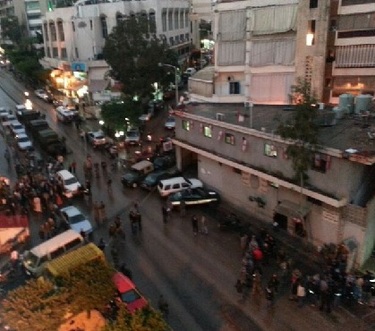 The United States is deeply concerned with the continued violence in the northern city of Tripoli and “attempts to spark violence” in Beirut’s Tariq al-Jadideh neighborhood, said the U.S. Embassy via Twitter on Friday.

“We call on all parties to exercise restraint and respect for Lebanon’s stability and security,” it said.

“The U.S. commends the Lebanese army and Internal Security Forces' efforts to work together and maintain calm in Lebanon,” it added.

“The U.S. remains committed to a stable, sovereign and independent Lebanon,” tweeted the embassy.

A mortar shell was found on Thursday in a garbage dumpster in the Tariq al-Jadideh neighborhood in Beirut.

The security forces dismantled the shell that was set to explode.

Mustaqbal MP Ammar Houri had stated on Thursday that he was headed to the area where the shell was discovered, suspecting that it may have been part of an attempt on his life.

I was passing by that area too
so the bomb meant for me
get a life mr. Houri