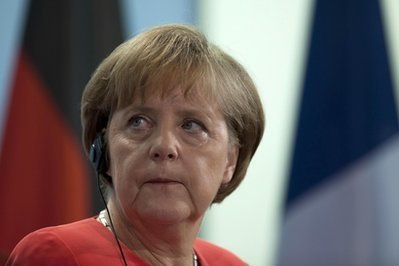 Germany's opposition Social Democrats will on Sunday launch their campaign to unseat Chancellor Angela Merkel next year, throwing their backing behind her former finance minister to challenge her.

Delegates from the center-left SPD party gather in the northern city of Hanover to formally hand Peer Steinbrueck, 65, the unenviable task of beating the hugely popular Merkel, often called the world's most powerful woman.

Steinbrueck's drive for chancellor has started disastrously with a stream of bad press, notably over revelations he had pocketed some 1.25 million euros ($1.63 million) in fees for making speeches at private functions.

And polls show the size of the challenge ahead of him to beat the conservative Merkel, 58, who is riding a wave of personal and party support for her firm approach in the eurozone crisis.

Surveys consistently put Merkel's Christian Democrats (CDU) around 10 points ahead of the SPD and a Forsa poll published on Thursday suggested Steinbrueck is also a long way behind her in the individual popularity stakes.

Germans do not directly elect their chancellor but if they could, 50 percent would plump for Merkel and only 26 percent would vote for Steinbrueck in the election expected in September, the poll showed.

Steinbrueck's share has dropped from 35 percent since the damaging cash-for-speeches affair, the survey for RTL television and Stern magazine showed.

"The SPD is at an extraordinarily difficult starting point," said Nils Diederich, political scientist at the Free University in Berlin.

Nevertheless, Steinbrueck, a gruff and punchy character from Germany's north, is expected to come out fighting and give a fiery speech after his nomination.

While Merkel hails her government as "the most successful since reunification" in 1990, he has previously branded her cabinet the weakest in modern German history.

The SPD wants to present the image of a party that is "decisive, motivated and open to the concerns of the people", said general secretary Andrea Nahles ahead of the conference.

She said the central themes of the SPD election campaign would be gender equality, health, education and tax policy.

But Diederich argued that one of the party's main problems is that Merkel's CDU is reaping the economic benefits of labor reforms agreed under a previous SPD administration.

"Merkel has taken over and implemented many of the elements of Agenda 2010. On the euro crisis, the SPD does not have many points of attack. It can only support Merkel," the expert told AFP.

Another political scientist, Ulrich Sarcinelli from the University of Koblenz, also doubted whether Steinbrueck -- seen as being from the right flank of the party -- could rally the troops behind him.

After Merkel was re-elected as CDU chairwoman on Tuesday by nearly 98 percent of her party, "it is questionable whether Steinbrueck can mobilize his party. He needs their support", said Sarcinelli.

But Diederich thinks the SPD will present a united front, noting that the conference had been called especially for that purpose.

"Like the CDU faithful, the SPD members will show their discipline and unite behind a candidate 10 months before the elections," he said.

Merkel has hesitated to really go after Steinbrueck, her finance minister between 2005 and 2009, perhaps with the thought that they could yet be forced together again in a grand coalition.

But that has not stopped others in her party from licking their lips at the prospect of tackling a candidate who so far has struggled to get on the front foot.

"First of all the SPD had a bit of bad luck, and then along came Steinbrueck," Volker Kauder, a close Merkel ally, told the Sueddeutsche Zeitung.