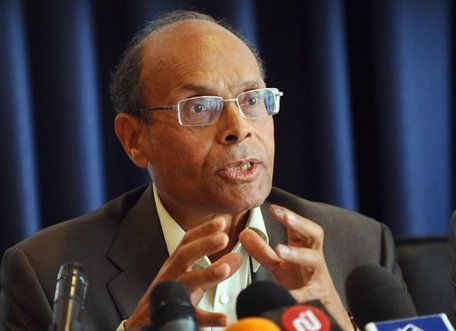 Tunisian President Moncef Marzouki has denounced arms trafficking in North Africa since the fall of Libyan dictator Moammar Gadhafi, a particular source of concern given the current strife in Mali.

The Gadhafi "regime accumulated weapons, and now some are in the hands not only of Islamists from Libya, but also from Algeria and Tunisia," Marzouki said in an interview with The World Today, edited by London-based think tank Chatham House.

"The danger now is that all these guys will go to Mali and train and make a holy war like in Afghanistan, and then they will come back to Tunisia. Our main foreign policy challenge for the next three years is to restore order to Mali."

Mali has been in turmoil since three Islamist groups, among them al-Qaida in the Islamic Maghreb, seized control of the country's north after a coup in March, and Tunisia backs a political solution to the conflict.

In an interview appearing in the December-January issue of the magazine, Marzouki spoke about an attack on the U.S. embassy in Tunis by hardline Islamists known as Salafists.

"This attack was a surprise for me and the government. We didn’t realize how dangerous and violent these Salafists could be," he said, explaining that the interior minister had thought it would be just another of many rallies.

"We saved the life of the U.S. ambassador by sending the presidential guard; but the image of Tunisia was badly damaged in the United States and in Europe."

Marzouki insisted that Salafists in Tunisia are "a tiny minority within a tiny minority. They don’t represent society or the state."

While arguing that they "cannot be a real danger to society or to government," he said "they can be very harmful to the image of the government."

He also downplayed growing concerns in the Western world that Islam and democracy are incompatible.

"Islamism is a very wide spectrum, going from the Taliban to (Turkish Prime Minister Recep Tayyip) Erdogan. We have the good fortune in Tunisia to have the central part of the spectrum in the form of the Ennahda movement," which rules Tunisia in a three-party coalition.

"The worst mistake is to consider Islamism as monolithic. It is not. You probably know that now the worst enemy for Ennahda are the Salafists."

Marzouki defended his center-left Congress for the Republic's alliance with Ennahda, saying the "center has to hold together. What I really fear is a misunderstanding with the moderate Islamists."

Turning to delays in drafting a new constitution following the revolution that ousted long-time dictator Zine El Abidine Ben Ali two years ago, Marzouki said there is still disagreement over whether the political system should be presidential or parliamentary.

"We still have a lot of differences between us and Ennahda. And we will need time to discuss the electoral law. This will probably be more difficult than the constitution itself."

Marzouki said he longed for stability in a country where he said the "situation is getting worse by the day."

He said investors, foreign and Tunisian, are waiting for a new constitution and government.

"Without investment and commitment we cannot attack economic issues. We have to hurry. Otherwise Tunisia will be in a mess."