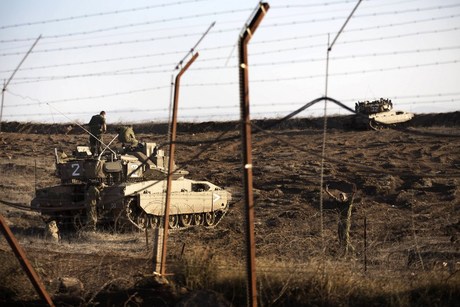 The United Nations is strengthening its force monitoring a ceasefire between Syria and Israel because of the growing threat from the Syria conflict, a top U.N. official said Friday.

U.N. peacekeeping chief Herve Ladsous said extra armored cars would be sent to the force in the strategic Golan Heights where tensions have escalated in recent months as the civil war spreads.

The unarmed U.N. observers say they have been threatened and have also had to treat Syrian forces following battles with opposition rebels in the demilitarized zone, according to a new report by U.N. leader Ban Ki-moon.

Four Austrian members of the U.N. Disengagement Observer Force (UNDOF), which has been in the Golan since 1974, were wounded as they drove to Damascus airport last week. Syrian and Israeli forces have repeatedly exchanged fire across the ceasefire line.

Canada pulled its small contingent out of UNDOF in September and other contributor countries have raised concerns, diplomats said. Austria, Croatia, India, Japan and Philippines provide the 1,000 troops in the force.

"We take very much to heart the safety and security of our personnel in UNDOF," Ladsous told reporters.

On top of sending extra armored cars, the force would reinforce its "political analysis capacity," Ladsous said. "We do all this in very close consultations with our troop contributing countries."

The UNDOF countries are to meet next week ahead of the U.N. Security Council's renewal of the force's mandate.

U.N. leader Ban has recommended that the force get a six month approval while adding in a new report that UNDOF has drawn up "contingency planning" for a worsening of the Syrian conflict.

He said the presence of Syrian troops in the demilitarized zone was a "grave violation" of the 1974 ceasefire accord between Syria and Israel.

Syrian rebels have also tried to set up bases in the Golan zone, taking advantage of the absence of government forces, diplomats said.

Ban said he feared that the presence of armed opposition fighters and Syrian security forces in the zone could "ignite a larger conflict" between Israel and Syria.

The observers have seen deadly battles between Syrian troops and rebels and arms shipments between Lebanon and Syria through the demilitarized zone, said the report.

"UNDOF saw nine Syrian security forces personnel killed by 13 armed members of the opposition during an ambush," said the report.

U.N. vehicles had been hit by gunfire and U.N. forces have frequently had to treat Syrian troops following their battles with rebels in the zone. "UNDOF has provided immediate first aid and emergency medical treatment on a humanitarian basis when feasible," Ban said.

UNDOF had also seen "13 masked persons in black attire" cross the border into Lebanon in September to collect weapons which they were seen to bring back into the ceasefire zone, said the report.

Two days later "UNDOF saw nine Syrian security forces personnel killed by 13 armed members of the opposition during an ambush" in the zone.

Ban said the presence of the observers was "essential" because of the heightened tensions.

I think that the UN forces would be a lot more useful on the Lebanon-Syria border than on the Golan Heights border.