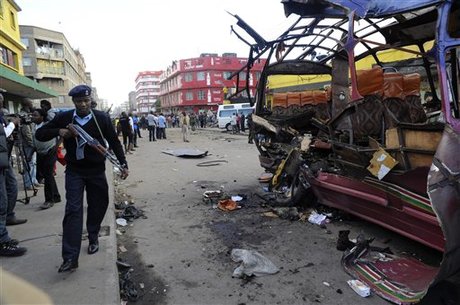 Three people were killed and eight wounded in a blast outside a mosque in the Kenyan capital, the Kenyan Red Cross and police said Friday.

There were "three fatalities" as well as several wounded, some critical, a Red Cross official said after the "explosion near a mosque in Eastleigh", a largely ethnic Somali district of Nairobi.

"We were told that three people have died of injuries from the incident," Nairobi police chief Moses Nyakwama told AFP, "There are eight others in hospital, among them is a member of parliament."

The grenade was hurled at worshipers leaving a popular mosque minutes after the end of the evening prayers. A handful of protesters took to the streets soon after the blast but were quickly contained by a heavy police presence.

Eyewitnesses say that police and rescue organizations are currently in the area in a security operation and that residents remain locked up in their houses.

"Three ambulances are in the area. Police are patrolling, many residents have locked themselves in their houses," Joe Chaudhry an area resident told AFP via phone.

Kenya has suffered a string of attacks often blamed on al-Qaida-linked Shebab militants since it invaded Somalia last year.

Kenyan troops, now integrated into an African Union force, seized the Shebab bastion of Kismayo in September, a key southern Somali port, prompting warnings of retaliation from both the insurgents and their Kenyan supporters.

The Shebab have denied involvement in previous similar bombings.

The Muslim Youth Center (MYC), a Kenyan Islamist group that has pledged its support to the Shebab, were swift to highlight the blast on its Twitter site noting a "boom in Eastleigh", but not claiming responsibility.

Violence in Kenya -- ranging from attacks blamed on Islamists to inter-communal clashes to a police crackdown on a coastal separatist movement -- have raised concerns over security ahead of elections due in March 2013.

Five years ago, elections descended into deadly post-poll killings that shattered Kenya's image as a beacon of regional stability.

Last month, riots broke out in Eastleigh district after the bombing of a bus, with running street battles between demonstrators and the police.