Rebels Seize Chunk of Aleppo Base as Fighting Rages across Syria 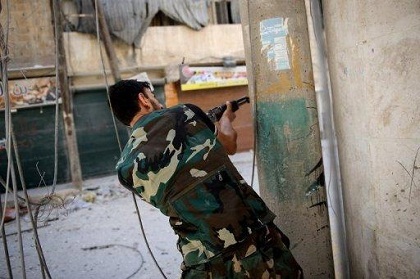 Syrian rebels on Sunday seized control of a sector of Sheikh Suleiman base west of Aleppo, bringing them closer to holding a large swathe of territory extending to the Turkish border in the north.

The rebels took control of Regiment 111 and three other company posts located inside the base after fierce fighting overnight, the Syrian Observatory for Human Rights said.

"Two rebels and one soldier were killed, while five soldiers were captured. The prisoners said that 140 of their men had fled to the scientific research center on the base," Observatory director Rami Abdel Rahman told Agence France Presse.

Elsewhere in northern Syria, 10 were reported killed in regime shelling of the town of Maraayan, while five civilians, including a child, were killed as Ahsam village in Idlib province was shelled, the Observatory said.

The watchdog also reported clashes around the Wadi Daif military base, which rebels have been trying to take since seizing the nearby town of Maaret al-Numan two months ago.

The Observatory said the Syrian army clashed with rebels in the capital's southern Qadam neighborhood and on the southern and northeast outskirts of Damascus, pressing ahead with its bombardment of rebel-held towns.

Activists posted an Internet video of a large fire in the Port Said area" of Qadam. "The (rebel) Free (Syrian) Army hit the checkpoints," the cameraman says, as machine gunfire is heard in the background.

The military has for several days bombarded rebel strongholds in the suburbs from ground and air, raising fears of a looming ground assault by the army to try to establish a secure cordon around the capital.

The Observatory, which relies on a countrywide network of activists and medics, gave an initial toll of 41 people killed nationwide on Sunday, including 19 civilians.

In all, more than 42,000 people have been killed since the uprising against President Bashar Assad's rule erupted in March last year, according to the Observatory's figures.

Yalla, his ouster is approaching...

Another big base ready to fall in the north. When the north is solidified and Aleppo is taken 100%......many of those fighters will relocate to Damascus.

I an waiting to see which Tuesday Aoun says it will be over.

Gabby11
don't regret what you wish for
when the extremist take over, you'll wish for days like mubarek, hussein, extr.
as the saying goes the devil you know is much better than the devil you don't know

Obama is like the Russians in WWII with regard to Japan. They waited and waited and did not engage until it seemed that through the efforts of the US, Japan would capituate, and then Russia declared war on Japan with the objective in mind of having a place at the table when post-war Japan was to be decided. Well, we all know how that went. Japan became a clone of the US under the leadership of Douglas McArthur.

Now with Syria, Obama is waiting to intervene, until US intervention will be irrelevant and he will win for the US at the post-War Middle East settlement table the same as Stalin won for Russia. Nothing.

You know, I figured some body like FT would post up and think I was comparing Obama to Stalin, you know the communist who murdered 25 million Russians. That was not the point of my post. My point was the historical precedent of great countries that cannot seem to make up their minds get left behind.

The time for the US to have stepped up in Syria was last year. Trying to step up now, as the Syrian Opposition has won for itself by its own ingenuity that which it sought from the US means that the US has lost that much more ability to have any impact on the post-Assad Syria and hence, the post-Assad Middle East.
They got their own shoulder held MANPAD's. Didn't wait on the US and so they are their own liberators, not the US. They will take which ever direction they will post-Assad, and the extent to which Islamists have carried the fight, they will carry the peace as well, unfortunately.

Do we really want the entire Middle East to be ran by extreme conservatism? Do we really want another president giving himself sweeping powers? (Mursi). Currently, that is the alternative to Assad's rule, a conservative Muslim brotherhood government influenced by groups such as al quaeda and taliban. I in no way support the killing of civilians or anyone
for that matter. But this so called Arab Springs is nothing but an extremist movement in disguise!