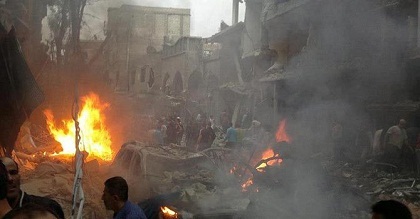 Romania's ambassador to Syria has left Damascus to relocate in Beirut due to security concerns, the Romanian Foreign Ministry said Sunday.

"The security situation in Syria is significantly deteriorating, including in central Damascus, which has led to a reduction of Romania's diplomatic activities," the ministry said.

The ambassador to Syria will monitor the situation from Lebanon, it added.

Romania is one of the few Western countries that kept its embassy in Syria open until now.

Thousands of Romanian citizens, most of them married to Syrian nationals, have been caught in the conflict in Syria.

The authorities in Bucharest called on them to "leave Syria as soon as possible".

More than 42,000 people have been killed since the uprising against President Bashar Assad's rule erupted in March last year, according to the Syrian Observatory for Human Rights.

this is a very confusing article. First of all, that the ambassador was still in Syria is odd, like was he in the same bunker as Assad? and Nassrallah for that matter?
Also, what do they mean that tons of romanian citizens are married to syrian nationals? when did this happen and how did this happen? Did the romanians come to syria to find spouses or was it the other way around? I am very confused!