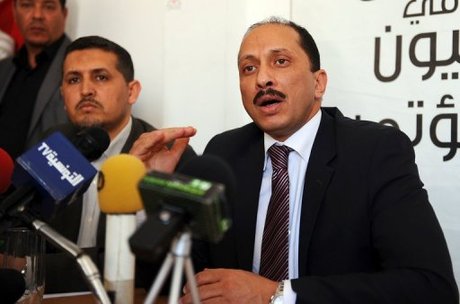 The party of Tunisian President Moncef Marzouki could pull out from the coalition government amid tensions with the ruling Islamist Ennahda party, the secretary general of the CPR warned on Sunday.

"The Congress for the Republic will quit the government if its proposals and those of President Moncef Marzouki are not taken into account," the party's secretary general Mohamed Abbou told reporters.

Marzouki, a veteran human rights activist with Tunisia's center-left CPR party, last month said the Islamist-led coalition government was not meeting the expectations of its people and called for a cabinet reshuffle.

The president warned that Tunisia was at a crossroads between "the road to ruin and the road to recovery" as unrest and strikes gripped the country, two years after the revolution that ousted dictator Zine El Abidine Ben Ali.

In November intense clashes between police and disaffected youths in the town of Siliana, southwest of Tunis, left some 300 people wounded, after a strike and protests over poor living conditions degenerated into violence.

Tensions are also mounting between the powerful General Union of Tunisian Workers (UGTT) and the ruling Islamists, and the UGTT labor union has called for a rare nationwide strike for December 13.

Many Tunisians feel bitterly disappointed by the failure of the revolution to improve their lives, especially in the country's marginalized interior, which suffers from a chronic lack of development and high unemployment.

And in an interview with The World Today, edited by the London-based think tank Chatham House, the president said earlier this week he longed for stability in his country where the "situation is getting worse by the day."