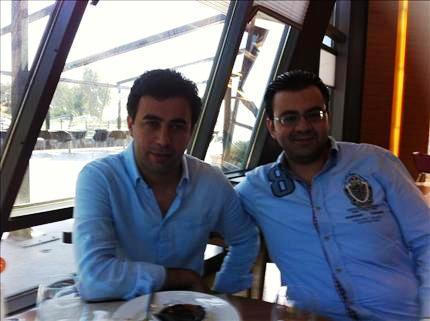 MTV said the arrest warrants were issued on charges of “arming and financing terrorist groups in Syria.”

For his part, the minister informed State Commissioner to the Military Court Judge Saqr Saqr of the content of the warrants, MTV added.

The development came a day after Judge Saqr requested the questioning of Syrian security chief Ali Mamlouk and a colonel identified only as Adnan as suspects in the case of former Minister Michel Samaha.

He also summoned Buthaina Shaaban, Syrian President Bashar Assad's media adviser, to be questioned as a witness in the case.

Mamlouk and Syrian colonel Adnan have been also charged in the affair.

OTV and al-Akhbar newspaper recently revealed that MP Saqr had been carrying out arms deals with Syrian opposition members, with the television station airing leaked recordings of conversations between the lawmaker and Meqdad.

MP Saqr last week gave a press conference, accusing OTV and al-Akhbar of tampering with the audiotapes and saying that he will file a lawsuit against them.

In October 2010, Syria ordered the arrest of 33 people over alleged false testimonies given in the U.N.-backed Special Tribunal for Lebanon, which is probing the assassination of Lebanese former Premier Rafik Hariri.

Scare tactics don't work anymore! we are lauging at you all the way. Your days are numbered and I thank God everyday this is hapening in my lifetime. The Syria of old and the baath regime are going to hell and there isn't a damn thing they can do about it.

I wonder if you were saying that about The baath regime of saddam which killed millions of people.. double standards

I never supported Saddam. Have no idea what gave you that impression.

Obviously...you've never been on a yacht FT...

walaw patriot, have you never seen a yacht with trees?

LOL.........Syria who? Assad? Your finished and still think you can make threats! Delusional just like the Farsi's out there that still beleive they have an upper hand.

balashna... i agree with FT

Flamer-you are patriotic after all. a bit misguieded but patriotic none the less. Is our bet still on for who doctored the tape and who didnt?

Reformist- I don't have a bet with you. are speaking on Flamer's behalf or does flamer have two accounts?
Not so mowaten- Alakhbar is about as credible as the onion.

nothing more than wishful thiniking on your part not so mowaten. Assad is finished!

pathetic comment from a dreamer who still dream the asad regime and their cronies will remain in power.
wake up mowaten and realize things are evolving in the world around you, while you remain in your lala land :)

March 14, relax. The Syrians are so busy cleansing the Sunni crazies at home and have no time to arrest anybody. I just hope cheikh Saad al-Haribi Telteyn al-Marajil won't land in Syria on his way to Lebanon, as he promised, and make it easy for the Syrians to nab him and plucker him hair by hair by hair. But then, if I believe the unbelievable Dr. Arreet 7akeh, the Syrian regime MIGHT fall again in 2012. I'll talk about gabby(i)'s predictions some other time, hopefully before his next increment!!! That is to say, Assad is running out of time (or is it Dr. Arreet 7akeh who is?) and has about 20 days remaining. Hoorrah! Honestly, I cannot wait for that fall, March 14. Keep hope alive, warriors. That would be the 21,649th time! Can you believe this number?

Peace as usual! Great value! Thank you for your contribution! Apply to a senior position at M14's headquarters

oh? you believe your posts are better? LOL... sweep in front of your door before lecturing others.... pityful reformist....

so why didn't they issue warrants against the Qatari emir, the Saudi king or the American president? If they did, your story would be much more believable.

funny words from you mowaten :)
you know there is a raging war in Syria? if you do, then you must know that it has turned into a sectarian war. sectarian wars are the worst wars and we experienced those, as well as Europe, and many other countries, and they were always ugly.
so what is your questions?

mowaten are you still counting on Assad getting out of this? you should reconsider, after all all of M8 is starting to..
and no word about HA's involvement.. nothing more to say.

So everybody fighting against Assad is a "terrorist"? Lol. That rethoric is so old. Who believes this guy anymore?

That said I'm sure there are some bad elements in the revolt & that will have to get cleaned up after, but I'm sure Saqr was helping the good guys.

Mowaten, all the mindless sheep on here who oppose ur opinions have recently thanked Bashar for earning dignity & victory to our brothers in Palestine. So, save ur breath This place is filled with people asleep with their eyes wide open!

I respect that FT had a different opinion albeit than mine in several matters. Atleast he can look at more than one angle. But Mowaten, you simply can't turn your neck man. Say no to crack.