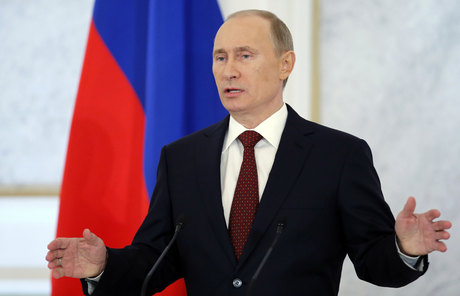 President Vladimir Putin on Wednesday encouraged Russians to have more children, saying three per family should be the average, as he seeks to battle an acute demographic crisis upon returning for a third Kremlin term.

"For Russia to be sovereign and strong, there should be more of us," Putin said in his annual speech to the Federal Assembly of both houses of parliament.

"I am sure that a family with three children should be the norm for Russia. But much needs to be done to make this happen."

During his presidential campaign earlier this year, Putin vowed to reverse the shrinking of Russia's population, a demographic crisis exacerbated by unhealthy lifestyles and blatant disregard for safety protocols.

Russia's falling population in the 1990s seemed like "the final verdict on the country", Putin said. But "we were able to break this destructive trend. This is our key achievement."

Russia's population has begun growing this year for the first time in post-Soviet history, with more births than deaths, Putin said.

The latest figures from the state statistics service indicate that there were 790 more births than deaths in the first 10 months of 2012.

The government touts the recent increase in birth rates as the product of a policy decision to reward families who choose to have a second child with cash bonuses and credits of around $10,000 that can be used to pay for housing or the child's education.

Starting from next year, additional financial benefits will go into effect for a third child, Putin said, praising the programs for "stabilizing the population figures".

Some demography experts say however that the government programs have had little to do with the recently improved birth rates, noting that the baby boomers of the 1980s have simply started having children.

I think the Lebanese would be glad to help :)