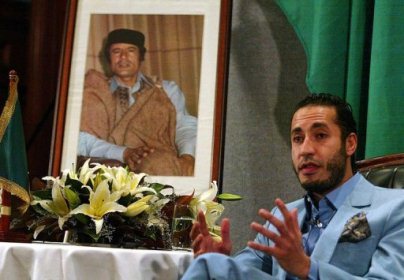 Libya on Wednesday reiterated its call for the extradition of slain Libyan strongman Moammar Gadhafi's son Saadi from Niger, which has granted him asylum since September 2011 on "humanitarian" grounds.

"The Libyan party has noted the threat posed by the presence in Niger of members of the former Libyan regime," said a government statement issued after a visit to Niamey by Libyan Prime Minister Ali Zeidan.

Libya "renewed its request for the extradition of those wanted people... and stressed that their trial in Libya would comply with international law."

The statement said that Libya has insisted that the former regime officials not be extradited to any third country.

"So far, we have not decided anything, consultations should continue, based on the terms of the Libyan request and existing provisions in international law," Niger's foreign minister Mohamed Bazoum told Agence France Presse.

Three of Gadhafi's sons were killed in the 2011 uprising that brought down Gadhafi's 42-year rule, including Mutassim who was murdered by rebels on the same day as his father.

Several key members of the Gadhafi clan have survived however, including Gadhafi's erstwhile heir apparent Seif al-Islam, who is wanted by the International Criminal Court but detained in Libya.

Former Libyan Olympic Committee chief Muhammad and Hannibal, who made headlines with his scandal-packed European holidays, are believed to be in Algeria, as is the fallen tyrant's daughter Aisha.

Saadi Gadhafi, who found shelter in neighboring Niger when his father's regime was crumbling, was best known as the head of Libya's football federation and a player who payed his way into Italy's top flight.

Niger justified the move as motivated by "humanitarian" reasons, arguing it had insufficient guarantees Libya's new rulers would give Gadhafi's son a fair trial.

Around 30 senior regime officials are believed to have crossed into Niger at the same time but the authorities in Niamey have not said how many remain on their soil.

Interpol had issued a "Red Notice" for Saadi Gadhafi for "allegedly misappropriating properties through force and armed intimidation when he headed the Libyan Football Federation."