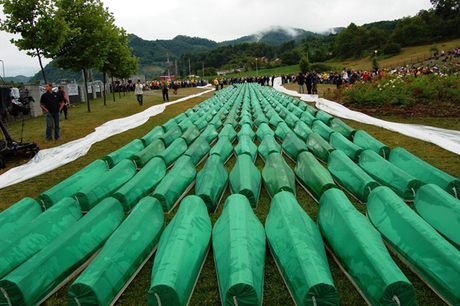 The U.N.'s Yugoslav war crimes court found Bosnian Serb general Zdravko Tolimir guilty of genocide for his role in the 1995 Srebrenica massacre, Europe's worst atrocity since World War II, and sentenced him to life in jail.

"The majority of the court finds you guilty" of crimes including genocide, judge Christoph Flugge told the Hague-based International Criminal Tribunal for the former Yugoslavia.

"Zdravko Tolimir, you are hereby sentenced to life imprisonment," the judge then told the gaunt former commander Wednesday, who crossed himself three times before the verdict was handed down.

After the sentencing, commotion ensued when members of a Srebrenica victims' organization confronted Tolimir's relatives outside the courtroom, screaming: "May God let you cry -- I have never found my youngest child."

The majority of the court's judges agreed with prosecutors who had asked for a life sentence, saying Tolimir, now 64, was involved in "massive" crimes committed at the Srebrenica and Zepa enclaves in July 1995.

They said they were "of a massive scale, severe in (their) intensity and devastating in (their) effect."

"The suffering of the women, children and elderly who were forcibly transferred from the Srebrenica and Zepa enclaves rises to the level of serious bodily or mental harm so as also to amount to genocide," the judges added.

Judges said Tolimir -- described as the "right-hand man and eyes and ears of (Bosnian Serb army commander) Ratko Mladic," -- who is also being tried by the court -- had overseen Bosnian Serb army officers conducting the slaughter of at least 6,000 Muslim men and boys at Srebrenica.

Judges highlighted a number of incidents during the massacres including at a warehouse a few kilometers from Srebrenica, where about 1,000 Muslim men and boys were taken after being captured by Bosnian Serb forces.

When the warehouse was full, Serb soldiers opened fire with machine guns and tossed hand grenades. "They fired for hours," only now and then pausing for a break, the judge said.

In another instance, a six-year-old Muslim boy survived an execution and stood up to ask Bosnian Serb soldiers "where his father was."

Conducting his own defense, Tolimir said that what happened at Srebrenica in eastern Bosnia in July 1995 amounted to "fighting against terrorist groups", rather than the murder of Muslim men and boys after Dutch peacekeepers at the "safe" enclave were overrun by Mladic's forces.

Tolimir, said Judge Flugge, "had full knowledge of the despicable criminal operations and himself furthered their goals," in this brutal episode in the Balkans country's bloody 1992-95 war that claimed 100,000 lives and left 2.2 million others homeless.

Apart from genocide, Tolimir was found guilty on six other counts including extermination, murder, persecution and forcible transfer.

Judges said prosecutors did not prove a count of deportation beyond reasonable doubt in relation to the attacks on Srebrenica and Zepa.

During his trial prosecutors said the former intelligence chief was part of a grand scheme to murder thousands of Muslim men and boys and expel thousands of woman and children from the enclave in order to create a "mono-ethnic Serb state."

The prosecution also alleged that about 25,000 women, children and elderly people were forcibly transferred from the enclaves to Muslim-controlled territories, while thousands of men and boys old enough to bear arms were executed and dumped in mass graves.

Tolimir was involved in a "joint criminal enterprise" to "summarily execute and bury thousands of Bosnian Muslim men and boys aged 16 to 60 captured from the Srebrenica enclave," according to the charge sheet.

During the trial, prosecutors said Mladic relied on Tolimir to "carry out the slow strangling of the Srebrenica and Zepa enclaves" to create conditions which would force the Muslim population "to give up hope of survival."

Tolimir is the most senior Serb to have a verdict handed down by the U.N. war crimes court since two Croatian generals and two former Kosovar guerrillas were acquitted last month, sparking Serbia's ire.

In 2004, Radislav Krstic became the highest-ranking Bosnian Serb officer to be sentenced on appeal to 35 years in jail for his role in the Srebrenica massacre.

Arrested in May 2007 in Bosnia-Herzegovina, Tolimir had seen his trial delayed several times due to ill health.

Mladic, also dubbed "the Butcher of Bosnia," was arrested in Serbia last year, and now faces 11 counts before the same Hague-based court, including for the Srebrenica massacre.