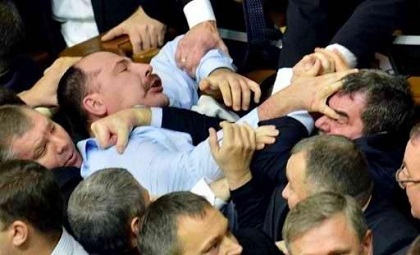 Violent scuffles broke out in the Ukrainian parliament Thursday as dozens of opposition and pro-government lawmakers brawled for a second day in a chamber notorious for its physical confrontations.

Deputies in suits and shirtsleeves climbed on tables, shouted and grappled with opponents as a protest against the practice of lawmakers pressing electronic buttons to vote for absentee colleagues descended into violence.

While lawmakers are legally obliged to vote in person, many of them run around pressing buttons for absent colleagues.

The parliament's opening session on Wednesday also saw fighting erupt between opposition lawmakers and deputies whom they accused of defecting to the pro-government camp.

Pro-government lawmakers tried to push back the opposition politicians who blockaded the speaker's tribune, while some clambered on to the desks of the parliamentary leaders and jumped down on their opponents.

The brawls were an ugly start to a new parliament dominated by President Viktor Yanukovych's Regions Party, which claims to have won a majority in legislative elections on October 28.

The fighting postponed a vote on reinstating Yanukovych's ally Mykola Azarov as prime minister, which was due to take place Thursday.

The towering boxing champion Vitali Klitschko, whose opposition party with the acronym UDAR, or punch, has won 42 seats in the parliament, refrained from joining the skirmishes.

"You could call the fists of a world champion a nuclear weapon. I don't think we will use this weapon yet," Klitschko said, quoted by the Interfax news agency.

But he added: "We do support the blockading of the tribune."

The October polls were widely criticized by the international community, coming as former Prime Minister Yulia Tymoshenko continues to serve a seven-year prison term for abuse of power that she argues is politically motivated.

The Ukrainian parliament is often the scene of scuffles with lawmakers throwing eggs and letting off smoke-bombs.

Two years ago several opposition deputies were badly injured in a bloody brawl prompted by the opening of a criminal probe into Tymoshenko that saw punches thrown and chairs hurled.

order! order! always have some wodka before entering the sessions; there were few women deputies in the back...I wish they had a catfight...