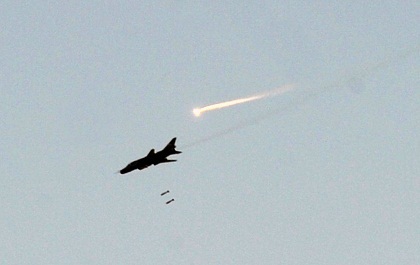 A former Syrian officer who served in a battalion specializing in surface-to-surface missiles told AFP on Thursday regime forces had fired Scuds three days ago, but the government has denied this.

First Lieutenant Aaraba Idriss said he is still in contact with officers and members of his former Battalion 57, part of Brigade 155, despite defecting 10 months ago.

He said they told him they fired five Scud missiles for the first time on Monday from their location in Nasiriyeh on the highway between Damascus and the central Syrian city of Homs.

A soldier, who defected on Tuesday morning, corroborated the report to AFP.

Idriss said the "Golan-1" missiles were either Russian-made or Russian modified" and have a range of up to 300 kilometers (180 miles).

The Local Coordination Committees, a network of opposition activists on the ground, said on Monday that "regime forces fired a long-range Scud missile from the Nasiriyeh area," but was unable to determine its target.

According to a source in Damascus, the army had actually fired a smaller, Syrian-made version of the Scud.

A U.S. official told AFP on Wednesday that the regime had fired Scud missiles at oppositions targets.

"Biased and conspiratorial rumors are spreading in anti-Syrian circles that the Syrian army is using Scud missiles in response to armed terrorist groups when it is known that Scuds are strategic, long-range missiles and are not suited for use against armed terrorist gangs," a statement said.