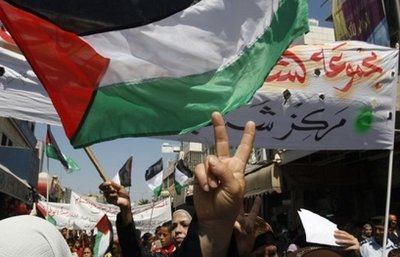 Thousands of Palestinians attended a rare Hamas rally in the northern West Bank city of Nablus on Thursday, celebrating the group's "victory" over Israel in Gaza.

The rally is the first time that the West Bank's ruling Palestinian Authority -- which is dominated by the Fatah faction, Hamas's bitter rival -- have allowed such a gathering since 2007.

An AFP correspondent said at least 5,000 people were taking part in the celebration, which also marks 25 years since the establishment of the Islamist group.

Despite an overcast sky, the mood was exuberant, with enthusiastic youths waving the green flag of Hamas as a procession left the city's Al-Nasser mosque.

Yussef Iqtishaat, a teenager attending the rally with his family, was among those eagerly brandishing the movement's flag.

"It's a great day thanks to the victory in Gaza," he told AFP.

Women wearing headscarves carried banners praising the movement and its armed wing, the Ezzedine al-Qassam Brigades. "Jihad is our way," and The battle (in Gaza) is the road to liberation," some read.

"We are with Hamas, you are the gun and we are the ammunition," one banner said.

Some of those attending also carried wood models of the rockets fired by Hamas and other Gaza groups at Israel during the eight-day conflict last month, which left more than 174 Palestinians and six Israelis dead.

The rally was a rare opportunity for Hamas to display its support in the West Bank, where the Palestinian Authority has clamped down on the rival group.

The longtime rivalry between the two Palestinian movements boiled over in 2007, a year after Hamas won a surprise victory over Fatah in legislative elections.

Armed members of the two groups battled in Gaza, with Hamas eventually routing Fatah and taking control of the coastal territory, while the Palestinian Authority continued to rule the West Bank.

Years of mutual suspicion and recrimination followed, with the movements arresting each others members.

The two sides signed a reconciliation deal last year in Cairo, pledging to set up an interim consensus government of independents that would pave the way to legislative and presidential elections within 12 months.

But implementation of the deal stalled over the make-up of the interim government, and a February deal between Fatah leader and Palestinian President Mahmoud Abbas and Hamas chief-in-exile Khaled Meshaal intended to overcome outstanding differences was opposed by Hamas members in Gaza.

Both Abbas and Meshaal have said in recent weeks they hope to restart the reconciliation process.