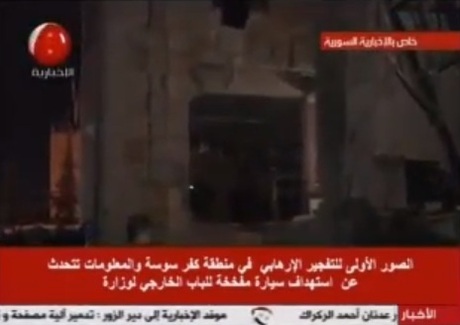 The jihadist al-Nusra Front claimed on Thursday that two of its men were responsible for a deadly suicide attack on the Syrian interior ministry the day before, via its official Twitter account.

"Thank God, we targeted the interior ministry building in Kfar Sousa district in Damascus at 5:30 pm on Wednesday, December 12," the extremist group Tweeted, adding that fighting had erupted inside the ministry.

According to its account, two suicide bombers parked two explosives-laden vehicles outside the building, entered and clashed with security forces before detonating their explosive vests.

The two car bombs were detonated remotely, it said.

One car was positioned in front of the office of the minister, Mohammed Ibrahim al-Shaar, who was lightly wounded in the shoulder when his office ceiling collapsed, a security source told AFP.

"He was taken to hospital but his condition gives no cause for concern and he should be discharged rapidly."

According to the same source, the attack was made possible by a "betrayal" in the security services of the ministry.

"It is impossible for a car to approach the entrance to the ministry if it is not an official vehicle," he said.

The Syrian Observatory for Human Rights said nine people were killed in the attack, including a parliamentarian and eight members of the security forces, while 20 others were wounded.

Shaar narrowly escaped death in a spectacular July 18 bombing that claimed the lives of four other top security officials, including the defense minister and the brother-in-law of President Bashar Assad.