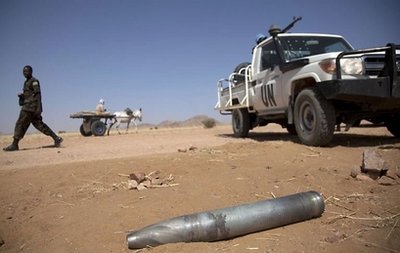 The ICC has already issued arrest warrants against Sudan's President Omar al-Bashir and other top government and militia figures over the conflict, now nearing its tenth year in which the U.N. says at least 300,000 people have died.

The conflict has seen a new surge this year with Sudanese war planes attacking villages and at least six U.N. peacekeepers have been killed in ambushes and other incidents in the last six months.

A written report by the ICC prosecutor to the Security Council also highlighted attacks by rebel groups and their alleged use of child soldiers. But government forces are at the center of Bensouda's investigations.

"The words of the government of Sudan representatives, promising further peace initiatives, are undermined by actions on the ground that show an ongoing commitment to crimes against civilians as a solution to the government's problems in Darfur," the prosecutor said.

Bensouda urged the 15-member Security Council to take action to back efforts to carry out the existing arrest warrants.

"The question that remains to be answered is how many more civilians must be killed, injured and displaced for this Council to be spurred into doing its part?" she said.

Ethnic minority rebels in the western region launched an uprising against the Arab-dominated government in 2003. The ICC charges in 2005 followed attacks by the army and its feared Janjaweed militia ally against Darfur towns and villages.

Although violence is down from its peak, more than one million people remain displaced in camps, villages have been razed, and rebel-government fighting, banditry, inter-Arab and tribal disputes continue to afflict the region.

The ICC's written report to the Security Council highlighted accounts that shelling in the Hashaba area of North Darfur in September had killed at least 60 civilians with scores more killed in air raids and bombardments between July and October.

The ICC said that widespread rapes in Darfur were being under-reported because of "the reported persecution of of those who speak out about rape by the Sudanese Security Forces."

Bensouda highlighted growing frustration at the failure to secure their arrests and said the Security Council must act.

"Victims of Darfur crimes can hardly wait for the day that fragmentation and indecision will be replaced by decisive, concrete and tangible actions they expect from this council," she said.

The African Union has called for the suspension of the Darfur arrest warrants. Only seven countries on the 15-nation Security Council are also ICC members.

"We had expected that the court would abstain from unsubstantiated reports not backed up by the facts," Osman said.

The ICC report was "in total contradiction to the reality in Darfur" and Bensouda had taken "a shameful approach despite positive changes taking place in Darfur," he added.