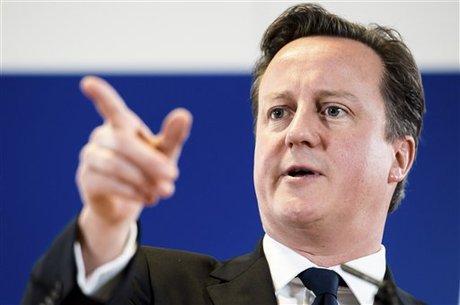 Doing nothing is not an option in Syria, British Prime Minister David Cameron said Friday as his European Union counterparts pledged to look at "all options" available to support the opposition and civilians.

"Inaction and indifference are not options," said Cameron, whose government has formally recognized a recently formed Syrian opposition coalition.

The situation in Syria, with more than 40,000 now dead, was "truly dreadful and getting worse," he said, adding that there was "no single, simple answer."

In a statement issued at the close of an EU summit, leaders said they were "appalled by the increasingly deteriorating situation in Syria" and urged their foreign ministers to "work on all options to support and help the opposition and to enable greater support for the protection of civilians."

They said President Bashar Assad had to go, with Cameron wanting the "speediest transition possible" to avoid more bloodshed.

Earlier, French President Francois Hollande had said Assad was losing and must be made to leave as quickly as possible.

"On the ground, the war is now turning against Assad and we should set ourselves this objective -- make Assad leave as quickly as possible," he said.

The EU so far has stopped short of full recognition of the opposition, although earlier this week EU foreign ministers met the leader of the National Coalition for Syrian Revolutionary and Opposition Forces at talks in Brussels.

Some EU member states are cautious about extending full recognition to the coalition because of doubts over how representative it is and its democratic credentials.

In their statement Friday, EU leaders said they supported a future Syria that "is democratic and inclusive with full support for human rights and the rights of minorities.

"The European Council will continue to address the situation in Syria as a matter of priority," they added.

give them the weapons they have been asking for, and the Syrian people know what to do! Do not go there, it will come back to haunt you, as were the cases of iraq, afga, libya...keep your bush doctrine to yourself, and stand still laddy...

"Inaction not option" shou these people go to rhyming school before running for office?