Tens of Thousands at Funeral of Morocco Anti-Regime Islamist Leader 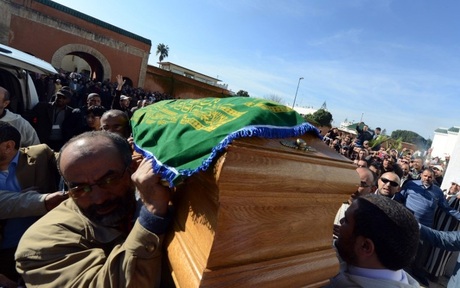 Tens of thousands of devotees gathered in Rabat on Friday for the funeral of Abdessalam Yassine, the founder of a radical Moroccan Islamist movement whose outspoken criticism of the monarchy landed him in jail.

Sheikh Yassine founded the Adl wal Ihsan (Justice and Charity) movement, which actively participated in Arab Spring protests that erupted in Morocco in February 2011, as revolutions swept Egypt and Tunisia.

But it distanced itself from the February 20 protest movement last December, considering its demands too limited, and analysts say that was a key reason why the street protests lost momentum.

"It is our father who has left us," Mohammed, a young supporter from Kentira, 40 kilometers (25 miles) north of Rabat, said at the funeral, which took place at the 18th-century Sunna mosque next to the royal palace.

The crowd said the Islamic prayer for the dead after midday prayers at the mosque in the capital's center, before heading to Martyrs Cemetery next to the Kasbah for the burial of Sheikh Yassine, who died on Thursday aged 84.

A large security detachment was deployed in the area.

Yassine was an outspoken opponent of the monarchy and was imprisoned twice during the so-called Years of Lead under the late king Hassan II.

He sent an open letter to the king in 1974 urging him to choose between "Islam or the deluge," and was imprisoned without charge shortly afterwards for three and a half years before being confined to a mental hospital.

He was jailed again in 1983 for two years, and finally placed under house arrest until the accession to the throne in 2000 of King Mohammed VI.

Justice and Charity advocated the establishment of an Islamist state but rejected violence to achieve it.

The movement, banned but tolerated in the north African kingdom, is thought to have an extensive support base, especially in poorer neighborhoods.

"He founded a complete system, to provide education, to support the poor and to strengthen the relationship between the individual and God," a member of the movement, who gave his name only as Driss, told Agence France Presse.

"The movement exists in nearly every town in Morocco. It is a socio-cultural movement that is opposed to the existing system, which is why the makhazen did not like him," the 28-year-old civil servant argued, referring to the king's inner circle.

Prime Minister Abdelilah Benkirane, who hails from the moderate Islamist Party of Justice and Development, visited Yassine's home after he died on Thursday, and his party offered its "deepest condolences" to the sheikh's family.

Originally from southern Morocco, Sheikh Yassine viewed the nature of the monarchy under Hassan II as unacceptable from an Islamic perspective.

His movement refuses to recognize the king's official title, commander of the faithful, a key difference with the ruling PJD, which won last year's elections and heads the ruling coalition.

In March 2011, Sheikh Yassine's daughter Nadia described the reforms announced by Mohammed VI, in a landmark speech that paved the way for a new constitution designed to curb his near-absolute powers, as insufficient.

Baudouin Dupret of the Rabat-based Jacques Berque research center described the sheikh as an "emblematic figure" who was a part of Moroccan life for 40 years and towered above any of his possible successors.