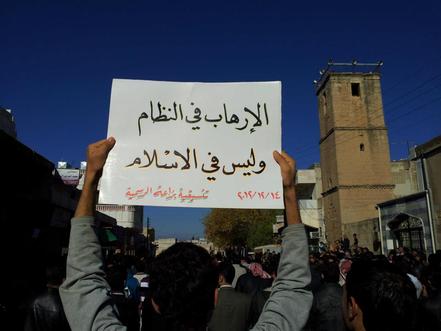 Thousands of Syrians took to the streets on Friday, criticizing Washington for blacklisting the rebel jihadist group Al-Nusra Front, as regime troops bombed southern districts of Damascus and clashes were reported around two military schools in the north of the country.

The protesters demonstrated under the slogan: "There is no terrorism in Syria except that of Assad."

Protesters in the Eastern Ghouta region, just outside Damascus and which has come under regular air raids by the regime army, held up a sign reading: "Thank you to all the 'terrorists' in Syria who are fighting Assad."

"We are all Al-Nusra Front," it said, in reference to the jihadist group blacklisted by Washington on Tuesday.

Lines of children and men linked arms and carried the three-starred flag of the revolution as they called for downfall of the regime in the street as shopkeepers looked on.

U.S. blacklisting of Syria's hardline Islamist Al-Nusra Front as a "terrorist organization" has drawn fierce criticism from rebels, opposition groups and activists, who have condemned the move as both ill-timed and ill-conceived.

Washington blacklisted al-Nusra, which has claimed the majority of suicide bombings that have rocked the country in recent months, warning that extremists could play no role in building the nation's future.

On the Syrian Revolution 2011 Facebook page, a retrospective of the most powerful scenes of the 22-month anti-Assad uprising were shown in a video footage -- from the original protests in Daraa to the massacre in the town of Houla in May.

"From the famous honor Friday we demonstrated in all cities and towns, to make the freedom dream a reality," read the subtitles, set against a dramatic musical score, and referring to the first protest in Daraa on March 18 last year.

"When Western countries feel threatened ... they try to minimize our great revolution and describe some revolutionaries as terrorists," the video said, professing "we will not allow anyone to interfere in our internal issues."

In the northwestern town of Kfar Nabal, demonstrators rejected exile for Assad, demanding that he be put on trial in Syria, where more than 43,000 people have died since the revolt erupted in March 2011, according to activists.

Syrian activists also had a revolutionary message for the citizens of Damascus allies Russia and China: "Intelligent peoples governed by idiots, remove your tyrants!" read a banner held aloft in Kfar Nabal as a line of children cheered.

Meanwhile, regime troops bombed southern districts of Damascus while rebels and soldiers battled around two military schools in the north of the country, the Syrian Observatory for Human Rights said.

"Several blasts rang out in Damascus as southern areas of the city were bombarded," said the Britain-based group.

Nine rebels and eight soldiers were killed in heavy clashes near the School of Administrative Affairs, a military academy between Aleppo city and the town of Saraqeb to the southwest.

Just north of Aleppo, fighting broke out near another military academy, one of the largest in the country, said the watchdog, which relies on a countrywide network of activists and doctors in compiling its reports.

The insurgents, who have encircled the sprawling infantry school for three weeks, will nevertheless have to mobilize significant numbers of fighters to take on the 3,000 soldiers stationed there, Abdel Rahman said.

In the Tassil area of the southern province of Daraa, three civilians were killed and several wounded by artillery fire at dawn, the watchdog said.

Fighting also broke out in the northwestern province of Idlib around the military base at Wadi Daif, under siege by rebels since they seized the nearby town of Maaret al-Numan, which was hit by air raids on Friday.

The Observatory said at least 42 people -- 14 civilians, 20 rebels and eight soldiers -- had been killed nationwide on Friday.

A second that BIG TIME allouch! Simply an idiot!

and very likely related to the Farsi BSThrower aka Motormouth (ASSistance).....

the islamistic neo zionistic alliance is in action! dream on baby

Yeah, these guys are bad news... in fact many of the Syrian opposition unfortunately seem to be the same slime as found in Egypt...Muslim Brotherhood are not even counted in Jabhat al Nusra, another major terrorist organization in Syria, then you have Salafi terrorists like Adnan Arour...who is very popular in some parts of Syria. THe US gave (this is proof) Assad all the time in the world to kill the so-called rebels, but he is failing...but the rebels will not get western help, because we've discovered many of them are Muslim radicals, some of whom are Al Qaida. Sad but true. Assad will be killed eventually, but let us hope and pray that he takes many more terrorists with him.

As I said before watch what you wish for
the devil you know is much bettere than the devil you don't know
see Egypt, Libya, etc.

And you in the same nutshell !