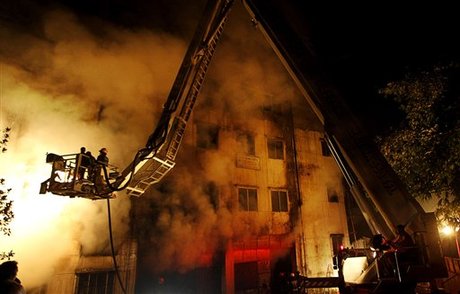 A fire that killed 111 workers at a Bangladesh garment factory last month was caused by sabotage and managers at the plant prevented victims from escaping, the head of an official inquiry said Monday.

"We have found that the fire that gutted Tazreen Fashion factory in Ashulia was an act of sabotage," Main Uddin Khandaker told Agence France Presse after submitting a report into the November 24 tragedy to the government.

"The statements of the witnesses revealed that it was an act of sabotage. There was no possibility of the fire originating due to an electric short-circuit or any other reason."

Khandaker did not suggest who might have carried out the sabotage or why.

He also said his inquiry team would recommend that the owner of the factory in the Ashulia industrial district near the capital Dhaka should face murder charges for gross negligence.

"There was also gross negligence on the part of the owner. We have suggested legal action against him and nine of his mid-level managers who barred the workers from leaving the burning factory," he said.

The owner of the plant, Delwar Hossain, told reporters after the blaze that he believed it was started deliberately but gave no details.

Fire investigators have said the nine-story factory, which made clothing for Western retailers such as Walmart and C&A, lacked a valid safety license at the time and only had permission for three floors.