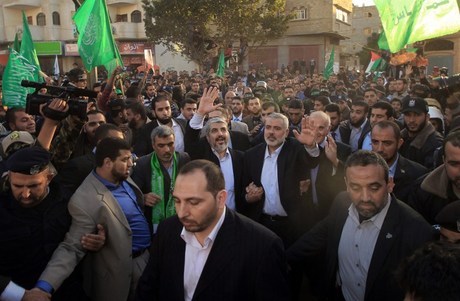 The Islamist Hamas movement ruling Gaza has seen a sharp rise in popularity since its eight-day war with Israel and would win as many seats as Fatah if a Palestinian vote were held now, a poll found Monday.

The survey, carried out by the Palestinian Center for Policy and Survey Research (PSR), comes after last month's conflict, a top-level visit to Gaza by Hamas chief Khaled Meshaal and after the Palestinians successfully won upgraded U.N. membership.

The results also showed "a dramatic increase" in the level of optimism regarding the possibility of reconciliation between Hamas and its mainstream Fatah rival which is headed by president Mahmoud Abbas and dominates the West Bank-based Palestinian Authority.

Some 39 percent of respondents said they believed political unity would be restored between the West Bank and Gaza in the near future, compared with just 14 percent in the previous survey in September.

Another 18 percent said they did not believe unity would ever be restored, down from 42 percent in September.

"The current percentage of optimism regarding reconciliation and the restoration of unity is the highest since separation," PSR said, referring to the bitter division which erupted in June 2007 after Hamas forced Fatah loyalists out of Gaza.

Were a presidential election to be held today, pitting Abbas against Hamas's Ismail Haniya, the Islamist prime minister would win, taking 48 percent of the vote, up from 40 percent three months ago, while the Palestinian president would take 45 percent, down from 51 percent in the previous poll.

"The percentage of vote for Haniya is the highest since Hamas's electoral victory in 2006," PSR said of the Islamists' landslide victory in the last legislative elections.

Were elections to be held today, nearly eight out of 10 people -- or 78 percent -- said they would vote, with 35 percent saying they would vote for Hamas, and 36 percent for Fatah.

"These results indicate a sharp increase in Hamas's popularity compared to our September results when it stood at 28 percent (31 percent in Gaza and 25 percent in the West Bank)," it said.

The survey questioned 1,270 adults between December 13-15 across the West Bank and Gaza, and has a margin of error of three percent.

The above are also the decievers of the palestian people. The people in the Gaza concentration camp have a controlled calorie intake per day.

If u didnt know this: iSRAEL LIMITS THE GAZANS' DAILY CALORIE ALLOWANCE!! sounds like a concentration camp to me, not a strip. Anyway back to the argument of why the people in this article are bad for palestinians. The logic goes like this: since our brothers in palestine (we are proud in being brothers to any deprived soul no matter what religion or race) are this poor and unsafe they directly surrender any real attempt at war.

This is true since they know they are so close to death they loose the moral. BUT this is what they see. A sudden war with israel, bombs from the sky falling on them and firework-like missiles being launched from within Gaza to israel. When the palestinians who get no financing from anyone but themselves cant stand up for this fight, the more corrupt financially-strong and armed party "wins" the war !!!! Out of desperations and deep confusion (mainly with respect to envisioning a viable and long-term plan for peace, be it through resistance or not) the palestinian praise the above and run for some aid.

Result : The above gain popularity !
Hamas : Win
israel: Win (by having an excuse for more future wars)
Palestinians: ... brings a tear to the eye every night

and btw, notice we watched the same movie in Lebanon back in 2006.