Major Exodus of Palestinians from Yarmuk Camp into Lebanon 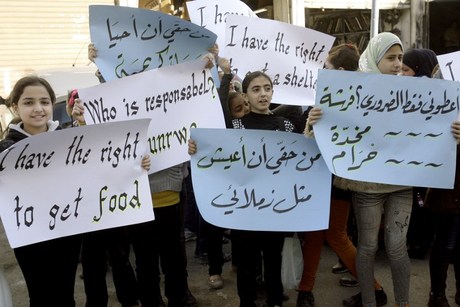 Lebanon saw a mass influx of Palestinians on Tuesday, as hundreds fled mounting violence in the Yarmuk refugee camp in Syria and entered through the Masnaa border in the east, an Agence France Presse correspondent said.

They will join about 2,000 other Palestinians who crossed into Lebanon over the past three days, according to estimates by the U.N. agency for Palestinian refugees (UNRWA) and the Lebanese General Security.

The correspondent said that dozens of buses and cars carrying Palestinians had arrived on the Lebanese side by midday.

The passengers told reporters they were coming from the Yarmuk refugee camp, which suffered unprecedented air strikes on Sunday that left eight civilians dead, according to one watchdog.

"There is shelling in several areas of the camp and most people have left," one young man said on condition of anonymity.

An official from the newly-formed Syrian-Palestinian displacement committee, responsible for the refugees coming to the Beddawi and Nahr al-Bared camps in northern Lebanon, said that between 60 and 70 families had arrived in the past 48 hours and were placed in homestays with relatives.

These are your allies ya M14 welew... Salafis and Palestinians, you've made us proud.

That is why that SOB bachar was bombing them. He will hang soon enough.

Bashar still have a lot of cards to destroy Lebanon.

mowaten its funny how you always come on here, then say the article is wrong or baseless or whatever. why dont you go to tayyar.org, they tell you exactly what you want to hear and you can live happily ever after in their obviously retarded comment section.

jajajajajaja rudy, well said amigo!!! yea mowaten, go on tayyar and leave us alone if you're not happy.

No no man. No nerve. I dont really care anymore. I just read and watch the "debates" here.

I like you man. You are maybe the m8 here with some sense. But then, what you dont realize is that what you accuse the m14 supporters of, you do yourself.
When the article says something you support you take it as proof and call everyone who says no a zionist brainwashed blablablaaaaaa.

What im saying is, keep an eye on whatyou are saying when the situation is reversed. When the article says simething bad about m8 you directly assume it is a propaganda article no based on anything except some zionist wahhabi agenda that only exist in your heads.

You arent putting any facts. Far from it. All you are doing is denying what the article claims as fact without anything to support your claim.

This is when I start believing that since naharnet belongs to 'Aime For Teen', each time an M8er posts a message he should be charged 50 cents. Because it takes lots of courage to read that much absurdities!!!!!

@Mowaten, thank you for sharing your critical thinking.... you are not biased at all -)

you have the right to saudi arabia, now go!

Bashar has been after the Palestinians ever since the Hamas leadership left and backed the FSA.

Oh god!!! Whyyyyyyyyyyy??!! Plz some1 figure out a peace plan n get these ppl outa here!!!

Welcome back, bros. Me'rab is all open arms. ya hala bi rijal al badiya. Me'rab's casa is su casa, too. With the help of the Palestinians and the Syrian version, aka the PalesSyrians, Lebanon is getting ready for another show of fireworks that will overshadow the last one that we had some 40-some short years ago. Who needs the Olympics when we have the Acrobatics show of Dr. Arreet 7akeh and cheikh Saad al-Haribi Telteyn al-Marajil and those superpowers behind them? Personally, I am all for al-Qaeda - Akkar and Tripoli Brigades winning the majority of the gold medals. Youppi yay yey, March 14. 3alalla t3oud bahjetna welefra7, 3alalla.