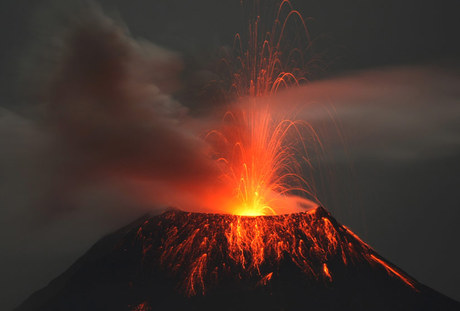 "During the overnight and early morning hours, there continued to be a series of explosive events and signs of quaking and (lava) emission," said a statement from the Geophysical Institute in Quito, capital of the Andean nation.

Authorities have issued an orange alert -- the second-highest warning level -- for towns near the volcano; it has not been elevated, officials said.

Greater activity has been building since Wednesday, along with a slight increase in gas emissions from the 5,029-meter (16,500-foot) volcano, located about 135 kilometers (84 miles) south of Quito.

Eruptions at Tungurahua, which means "Throat of Fire" in the indigenous Quechua language, peaked in 2006, killing six people in a Chimborazo village.

Several communities near Tungurahua, including the tourist town of Banos with 15,000 people, also were forced to evacuate during the volcano's violent eruption in 1999. Residents could only return to their homes a year later.