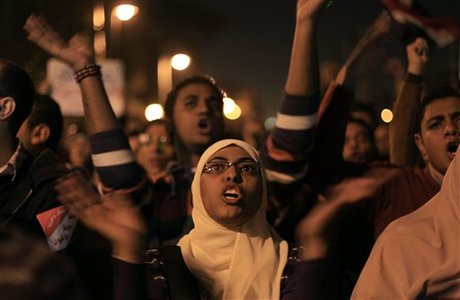 Hundreds of protesters demonstrated in front of the Cairo palace of Islamist President Mohamed Morsi late on Tuesday in a last-ditch bid to scuttle a draft constitution being put to a referendum.

The rally, of up to 2,000 people according to AFP correspondents, was smaller than previous anti-Morsi protests held over the past three weeks.

It was called by the opposition National Salvation Front to urge a "no" vote in Saturday's second round of polling in the referendum.

The Front was also protesting alleged fraud in the first round last weekend, unofficial results of which suggested the proposed constitution would be adopted.

Tallies by state media and Morsi's Muslim Brotherhood showed 57 percent support for the text -- less than Egypt's ruling Islamists had hoped for, but enough to secure victory without a major upset in the second round.

Some protesters on Tuesday said they would not accept the results of the referendum even if official results showed a majority backed the charter.

"We do not agree with this constitution. We don't recognize the referendum as valid," said one opposition protester near the palace, Ayyoub Laouindi.

"The constitution is void, the referendum is void. Egyptians' voices have been falsified and the ballot boxes been stuffed," said another, Suzanne Esmat, a tourist guide.

But the opposition is scathing of the document, which was written largely by Islamists, believing it weakens human rights protections, particularly for women, and sets the stage for a creeping advance towards Islamic sharia law.

Divisions over Morsi's rule and the draft constitution spilled over into vicious clashes between supporters and opponents of the president, with eight people killed and hundreds injured outside the palace on December 5.

The head of the military, Defence Minister General Abdel Fattah al-Sissi, warned against the polarization of the nation.

"The divisions are affecting the economy and threaten social peace, requiring of us solidarity, renouncing differences and putting public interests first," Sissi was quoted as saying.

The justice ministry responded to the opposition's fraud allegations by saying it was appointing judges to investigate.

But the secretary general of the electoral commission, Mahmoud Abu Shousha, vehemently rejected the opposition's claims that fake judges oversaw voting in some polling stations.

Many of Egypt's 21,000 judges were keeping up their pressure on Morsi, charging that he was trying to undermine their independence.

On Monday, the State Council Judges Club grouping nearly 2,600 top judges announced it would boycott supervision of the second round of voting. It joined an estimated 12,000 judges who already boycotted the first round.

And a protest by hundreds of prosecutors the same day forced the resignation of the prosecutor general, Talaat Ibrahim Abdallah, appointed less than a month ago by Morsi.

"This is undoubtedly a new crisis for Mohammed Morsi, showing that his decisions are not accepted by large sectors of the state system," a political science professor at Cairo University, Mustafa Kamel al-Sayyed, told AFP.

A commentator in the newspaper Al-Masri al-Youm, Hassan Nafaa, wrote that Morsi's drive to hold the referendum "has managed to do just one thing: solidify and deepen the division between Egyptians to a dangerous and worrying degree".