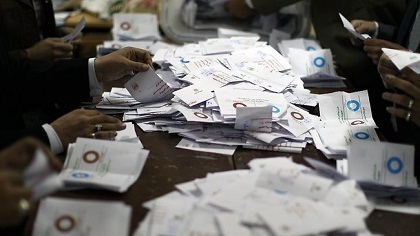 Egypt's opposition said on Sunday it will appeal a referendum seen as voting in a new constitution backed by ruling Islamists, and vowed to keep up a struggle that has spawned weeks of protests and instability.

Polling "fraud and violations" skewed the results of the two-stage referendum, the final leg of which was held on Saturday, the National Salvation Front charged.

"We are asking the (electoral) commission to investigate the irregularities before announcing official results," a Front member, Amr Hamzawy, told a Cairo news conference.

"The referendum is not the end of the road. It is only one battle," said another member, Abdel Ghaffar Shokr, reading from a Front statement. "We will continue the fight for the Egyptian people."

Germany immediately backed the call for a transparent investigation into the results. Foreign Minister Guido Westerwelle said: "The new constitution can only meet with acceptance if the process of its adoption is beyond reproach."

But Westerwelle said it was "not the power of the street but rather the spirit of compromise and tolerance that should determine the way forward for Egypt."

Egyptian state media and President Mohamed Morsi's supporters in the Muslim Brotherhood said the constitution was passed with the support of nearly two-thirds of voters, based on unofficial tallies.

A member of the national electoral commission, Mohamed el-Tanobly, told Agence France Presse that "no official date has been fixed" for the publication of the final referendum results.

The state news agency MENA had reported they would be released on Monday.

Opposition to the charter has fueled demonstrations for the past month, some of them violent, such as clashes that wounded 62 people in Egypt's second city of Alexandria on Friday, the day before the final round of voting.

The army has deployed troops to reinforce police since December 5 clashes outside the presidential palace in Cairo killed eight people and injured more than 600 others.

Morsi and Islamists backing the charter say it is necessary to restore stability after the early 2011 revolution that toppled president Hosni Mubarak.

But the opposition sees the new constitution as a wedge to usher in creeping Islamic law through a weakening of human rights, particularly women's rights, and undermine the independence of the judiciary.

It accuses Morsi of steamrolling through the referendum without consensus on the charter, and argues that a low voter turnout of around 32 percent undermined the plebiscite's legitimacy.

Approval of the constitution would trigger parliamentary elections in two months' time to replace an Islamist-dominated assembly that was dissolved by Egypt's constitutional court before Morsi's election in June.

In the meantime, all legislative business is being handled by the senate, also under the sway of Islamists.

In a gesture to "national dialogue," Morsi on Saturday appointed 90 additional senators, including eight women and 12 Christians.

The U.S. government, which sees Egypt as a pillar of its Middle East policy and provides Cairo with $1.3 billion annually in military aid, has deliberately avoided public comment on the crisis.

But the Republican chairwoman of the Foreign Affairs Committee in the U.S. House of Representatives, Ileana Ros-Lehtinen, called the vote "a defeat for the Egyptian people" at the hands of "an Islamic dictatorship."

She said: "We must use our aid as leverage to promote democratic reforms, support freedom of religion, and enshrine the protection of minority communities."

A foreign ministry spokesman in Iran, whose diplomatic ties with Cairo were cut three decades ago, said the new constitution would advance the goals of all Egyptians.

it seems arabs don't like democracy... secular voters said they would boycott the vote and with voter turn out of only 32% it seems that most did. this is their fault instead of rioting they should have been mobilizing their voters like the muslim brotherhood. sad day for egypt and bleak hopes for denocracy in arab countries!

Here I completely agree with you and envy the countries such as Australia and Belgium where voting is compulsory. At least then the people can't say that the elected government was voted in by a minority of the people.
Egypt, in my opinion, is simply going to fall downhill fast, in the present political situation, there is going to be no external investment, tourism is already on the slide, and very soon I can see Egypt going to the World Bank with cap in hand requesting loans.

very true, their economy is close to collapsing

secularists did not boycott tey voted no.