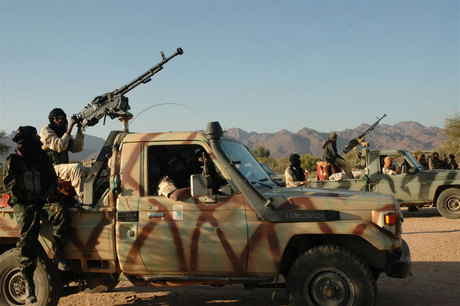 Islamists occupying Timbuktu in northern Mali were using pickaxes on Sunday to destroy any remaining mausoleums in the ancient city, an Islamist leader said.

"Not a single mausoleum will remain in Timbuktu, Allah doesn't like it. We are in the process of smashing all the hidden mausoleums in the area," an Ansar Dine leader, Abou Dardar, told Agence France Presse.

The claims were confirmed by witnesses, and backed by a resident who said he belongs to Al-Qaida in the Islamic Magreb (AQIM), the other militant group occupying the fabled city since a March coup plunged the west African state into chaos.

Anything that doesn't fall under Islam "is not good. Man should only worship Allah", said the AQIM resident Mohamed Alfoul.

"The Islamists are currently in the process of destroying all the mausoleums in the area with pickaxes," one witness confirmed.

"I saw Islamists get out of a car near the historic mosque of Timbuktu. They smashed a mausoleum behind a house shouting 'Allah is great, Allah is great'," another resident told AFP.

The International Criminal Court warned that their campaign of destruction was a war crime but the Islamists followed up with more damage in October, when they smashed several Muslim saints' tombs, prompting another international outcry.

The latest vandalism comes a day after another Islamist group in northern Mali -- the Movement for Oneness and Jihad in West Africa (MUJAO) -- said it had cut off the hands of two people and warned there would be more to come.

The amputations were seen as a sign that the armed Islamist groups were unfazed by the U.N. Security Council decision last week to back an African-led military force to take back the region.

But the operation will not be launched before September next year and the Security Council vowed in the meantime to work towards a peaceful solution.

Once considered one of Africa's most stable democracies, Mali has for months been mired in the northern conflict that has so far displaced more than 400,000 people, according to the United Nations.