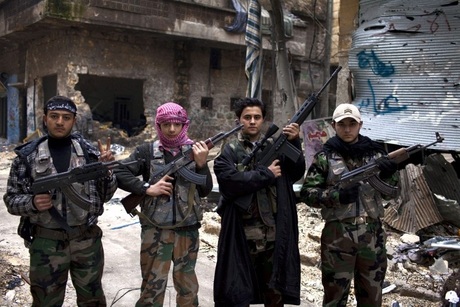 The world's largest Muslim body on Sunday condemned threats made by Islamist rebels in Syria against two Christian towns, warning of fresh confessional strife in the war-torn country.

Such threats "are contrary to the precepts of Islam which calls for tolerance, brotherhood and peace," said the 57-member Organization of Islamic Cooperation based in the Saudi city of Jeddah.

It warned against the risks of "a slide into confessional" conflict.

Islamist rebels, in a video message posted on Saturday, warned Mharda and Sqilbiya in Syria's central province of Hama that they will be attacked if they do not evict regime forces.

One of seven men armed with Kalashnikovs warned residents to expel gangs of President Bashar "Assad and shabiha (pro-regime militia) from your towns and convince them not to bomb our villages and families," in the video.

"If not, we will immediately attack the hideouts of Assad's gangs and shabiha," added the man, who identified himself as Rashid Abul Fida, head of the Al-Ansar Brigade in Hama.

Syrian Observatory for Human Rights director Rami Abdel Rahman said the towns both had pre-war populations in the tens of thousands but that most of their residents have fled.

Some 1.8 million Christians live in Syria.

Many have remained neutral in a conflict that erupted in March 2011 and has killed an estimated more than 44,000 people. Others, fearing a rise of Islamism, have taken Assad's side.

Let me answer that. Very easy answer, infact. There is no way in hell that these extrimist will take over in Syria.

isn t i because it happens that they want to attack these villages to fight bashar s troops rather than attacking them because they are chrsitians?
if these villages were druze or alawites or chias or sunnis , i guess it would have been the same. but as usual media need sentionnalism to sell their articles...