Syria Insists It Kept Out of Yarmuk Camp Clashes 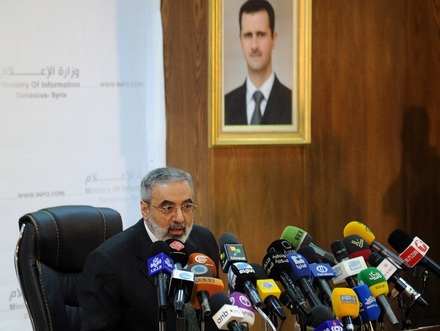 Syria insisted on Sunday its military played no role in last week's deadly clashes between pro- and anti-regime forces inside the Yarmuk Palestinian refugee camp in southern Damascus.

Information Minister Omran al-Zohbi also called for all Palestinian refugee camps in Syria to be kept out of the country's 21-month conflict that a rights watchdog estimates has cost at least 44,000 lives.

"The Syrian army did not intervene militarily, in any way, in the camp, neither by land nor by air," he said.

"The situation returned to normal inside the camp and the residents expelled the gunmen to restore stability," said the minister.

Refugees who had fled streamed back into Yarmuk on Friday after five days of fierce clashes between rebel forces and pro-regime Popular Front for the Liberation of Palestine-General Command.

Syrian regime warplanes carried out several deadly raids on Yarmuk after rebels gained the upper hand in the fighting, according to the Syrian Observatory for Human Rights.

Zohbi said the foreign ministry has written to U.N. chief Ban Ki-moon urging him "to call on countries supporting armed terrorist groups... to force them to leave the camp immediately to protect the lives of Palestinian refugees."

The fighting had forced about 100,000 of Yarmuk's 150,000 residents to flee the camp, many taking refuge in the parks and squares of Damascus, said UNRWA, the relief agency for Palestinian refugees.

Newspapers in Lebanon said on Friday that an agreement to keep the Palestinian camps out of the Syrian conflict was reached under the auspices of a representative of U.N.-Arab League peace envoy Lakhdar Brahimi.