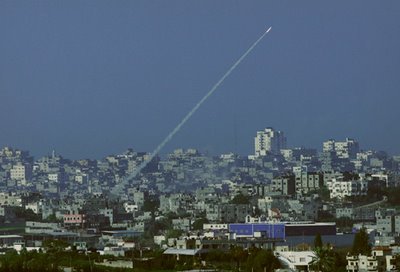 Palestinian militants in the Gaza Strip fired a rocket into southern Israel on Sunday for the first time since an Egypt-mediated ceasefire on November 21, Israel's army radio and other media reported.

The reports said it fell on open ground and caused no injuries, but an Israeli military spokesman denied that a rocket had hit.

"No rocket fell in Israeli territory," he told Agence France Presse, without elaborating.

Israel and the militant Islamist group Hamas which rules Gaza fought an eight-day war last month in which 177 Palestinians and six Israelis were killed before the truce took effect.

On Friday, Israeli troops shot and wounded five Palestinians near the Gaza border fence east of Jabalia, in the north of the coastal strip, Palestinian medical sources said.

The army said soldiers opened fire when a group of men moved into a no-go zone near the fence.

you live in a dream world .you neither have the technology ,strategy,education or firepower to do anything to the west ..you should pray that ww3 does not happen as people like you will be wiped of the face of the earth .