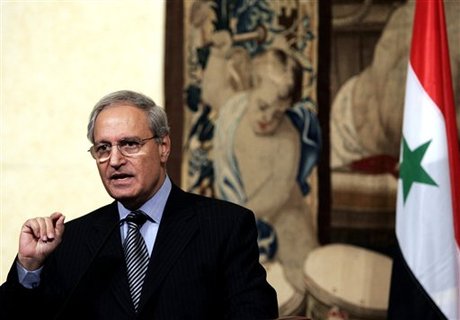 Syria's information minister on Sunday played down Vice President Farouq al-Sharaa's assessment that the country's bloody 21-month conflict could not be resolved by military means.

"It is one opinion among 23 million opinions in Syria, which is a state led by institutions and leaders who will give the final opinion," said Omran al-Zohbi, referring to Syria's population.

Sharaa said in an interview with the Lebanese al-Akhbar newspaper published last Monday that a clear winner was unlikely to emerge in Syria's war and he preferred a negotiated solution, in remarks at odds with President Bashar Assad.

"No opposition can end the battle militarily, just as the security forces and army cannot achieve a decisive conclusion," Sharaa said. "Every day that passes, we are moving further away from a military or political solution."

But Zohbi insisted that the military was "defending its country" against foreign-backed armed rebel forces. "The final decision will come from what is imposed on the battlefield and by political leaders."

However, the information minister also stressed the need for political action to resolve the conflict and insisted that the government was "the first to propose a political solution through a national dialogue."

Just words ... Nothing unusual for a Syria propaganda minister.

"It is one opinion among 23 million opinions in Syria, which is a state led by institutions and leaders who will give the final opinion,"

Lets not forget that the leader will give HIS FINAL OPINION.. which is what matters in the end...everything else is just a side show.