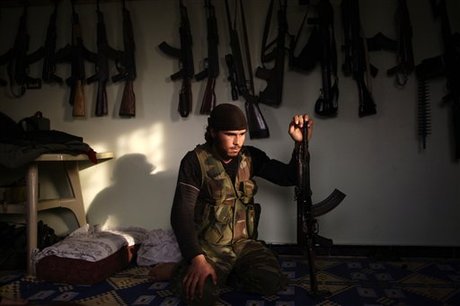 More than 700 Palestinians have been killed in Syria since the conflict there erupted more than 21 months ago, a Palestine Liberation Organization official in charge of refugees said on Sunday.

"More than 700 Palestinians have died in Syria since the beginning of the conflict, including in Yarmuk" refugee camp in southern Damascus, the PLO's Zakaria al-Agha told officials of Palestinian refugees in Arab states.

"We have asked the Syrian authorities not to let Palestinians be drawn into the conflict," he told the conference in the Egyptian capital.

Late on Sunday, several rockets were fired into the camp which has been the scene of deadly clashes between pro- and anti-regime forces for several days over the past week, the Syrian Observatory for Human Rights watchdog said.

The Britain-based group said two men were killed by the rocket fire and another was shot dead by a sniper.

Syria insisted on Sunday its military had played no role in the fighting.

Information Minister Omran al-Zohbi also called for all Palestinian refugee camps in Syria to be kept out of the conflict that the Observatory estimates has cost at least 44,000 lives.

"The Syrian army did not intervene militarily, in any way, in the camp, neither by land nor by air," he said. "The situation returned to normal inside the camp and the residents expelled the gunmen to restore stability."

The fighting had forced about 100,000 of Yarmuk's 150,000 residents to flee, many taking refuge in the parks and squares of Damascus, said UNRWA, the relief agency for Palestinian refugees.

Arab League chief Nabil al-Arabi in a statement to the Cairo meeting urged "the Syrian authorities and all fighting parties to assume their responsibilities on... protecting Palestinian refugees... and keeping them out of the conflict."

Next we'll be told that all 700 were non-combattant civilians.