20 Dead including 8 Children in Syria Shelling 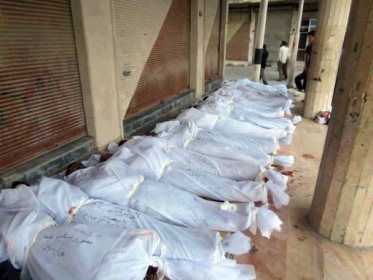 At least 20 people including eight children were killed as Syrian army tanks blasted the northern village of Kahtaniyeh on Wednesday, a monitoring group said.

"At least 20 people, among them eight children and three women, were killed in shelling by regime forces of farmlands in Kahtaniyeh village, west of the city of Raqa," said the Syrian Observatory for Human Rights.

Amateur video posted online by activists and distributed by the Observatory showed several bloodied bodies, including at least one of a child, laid out on blankets in a house.

"Dozens of people have been injured in farmlands of Kahtaniyeh, among them a whole family," according to activists in Raqa.

Raqa has seen an escalation of violence in recent months as rebels have launched an assault to seize several areas of the province, strategically located on the Turkish border.

The Observatory's head Rami Abdel Rahman said the casualties were caused by tank fire and that the victims were from farming families.

"Just to be clear, there are no al-Nusra Front jihadists or any other well-organised rebel groups there. The victims were just farmers," Abdel Rahman told Agence France Presse.