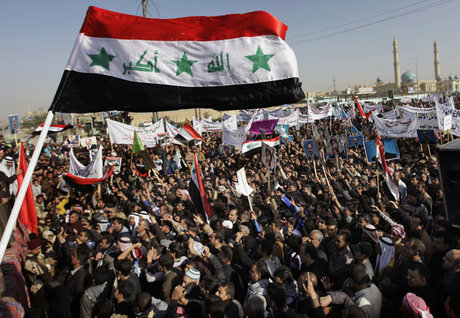 Fresh protests against Iraq's premier in mostly Sunni cities on Wednesday closed off the main road to Syria and Jordan, with one speaker raising the prospect of taking up arms against the government.

Thousands of demonstrators attended rallies in Ramadi and Samarra, capitals of two Sunni-majority provinces in central and western Iraq, to rail against what they said was targeting of their community by officials and security forces from the Shiite-led government.

Finance Minister Rafa al-Essawi, at least nine of whose bodyguards have been arrested on terrorism charges this month, attended the Ramadi rally and pledged to take a representative of the protesters "to negotiate with Baghdad."

But the demonstrators, who numbered in their thousands and blocked off the highway that connects the Iraqi capital to Jordan and Syria, responded, "We only want a revolution."

"We will not negotiate and we will not leave," said Ali Hatem Suleiman, who delivered a speech at the Ramadi rally. "If our demands are not met, there is no (option) before us, except to raise the weapon against the government."

Among his demands were for federal anti-terror legislation, which he said particularly targeted Sunnis, to be canceled.

Hundreds of protesters also gathered in Samarra, the capital of Salaheddin province north of Baghdad, repeating chants describing Maliki as a "coward" and an "Iranian agent".

Sectarian tensions are still significant in Iraq, which suffered years of brutal confessional violence in which tens of thousands of people were killed and many more forced from their homes.

Disaffected Sunni Arabs often characterise Maliki and his unity government as a puppet of neighboring Iran.

Wednesday's protests followed rallies on Sunday during which demonstrators, including local officials as well as religious and tribal leaders in Ramadi blocked off the same highway.