Over 1,000 Syrians Flee to Turkey after Bakery Attack 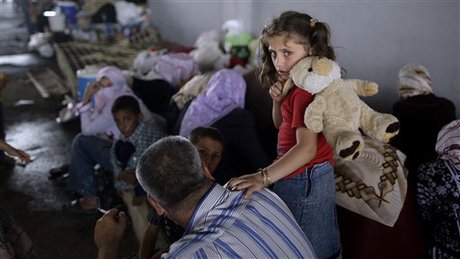 More than 1,000 Syrians crossed into Turkey in the last 24 hours after the Syrian regime attacked a bakery in the town of Halfeya, a Turkish foreign ministry official said on Wednesday.

"1,100 Syrians mostly women and children fled to Turkey in the last 24 hours through a border crossing in the town of Reyhanli," the official told AFP on condition of anonymity.

The latest influx triggered by the bakery attack in Syria has brought the total number of Syrians in Turkey to 148,000, he added.

At least 60 people are reported to have been killed in a regime air strike on a bakery in the rebel-held town of Halfaya, in the central province of Hama on Sunday.

Turkey is home to refugees fleeing the 21-month conflict in neighboring Syria as well as army defectors who are sheltered in several camps along the 960-kilometer (560-mile) border.

Ankara fell out with its one-time ally after the regime unleashed a deadly crackdown on protests in March last year, and has joined in Arab and Western calls for the ouster of President Bashar Assad.

Turkey was the first country who encouraged this massacre,
they should have no problem in hosting all those people who fled the massacre

But ASSad loves his beople. He would never hurt them. It must have been the FSA with a MiG.

Turkey should be thanked and hailed by all for its humanitarian assistance to Syrian refugees. The day of liberation is near, and the regime of Al- Assad and his gang will no longer threaten the life and security of innocent civilians in Syria.