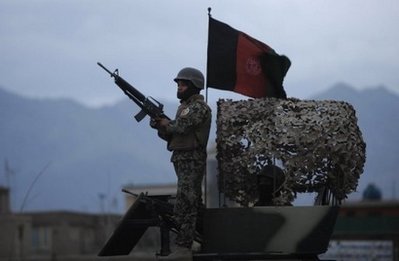 Four Afghan policemen were killed and two wounded on Thursday in an insurgent attack assisted by an insider loyal to the Taliban, officials said.

Attackers stormed the police post at Trin Kot, a remote district in the southern province of Uruzgan, before dawn and killed the officers as they slept, police spokesman Farid Ahmad Aiel told Agence France Presse.

One policeman who fled with the insurgents was believed to be a Taliban infiltrator who aided the attack, Aiel said.

"He had links with the Taliban and he helped the Taliban to attack the post. He had called them to attack while the other policemen were sleeping," the spokesman said.

Abdullah Hemat, a spokesman for the Uruzgan provincial administration, confirmed the incident and also blamed a Taliban infiltrator. One gunman was wounded during fighting and later arrested, he added.

"Insider" attacks by members of the police and army have become a major concern for the U.S.-led NATO force deployed in Afghanistan.

The attacks have seen a dramatic surge this year, causing scores of casualties among international troops and among local security forces.

The Taliban claim that insider attacks are carried out by its supporters. Afghan authorities and their NATO allies say most are personally motivated.

On Monday a female police officer killed an American adviser in Kabul's police headquarters. Police said she was mentally ill.