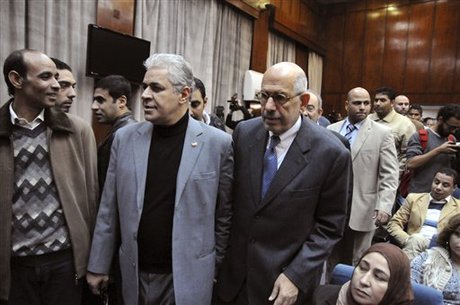 Egypt's public prosecutor on Thursday ordered a probe into the top three leaders of the opposition on suspicion of trying to incite followers to overthrow President Mohamed Morsi, a legal source said.

The prosecutor, Taalat Ibrahim Abdallah, who was appointed by Morsi late last month, signed the order against the leaders of the opposition National Salvation Front, which led protests against Morsi's drive to have a new constitution adopted.

The probe targets Mohammed ElBaradei, a Nobel peace prize laureate, Amr Moussa, former chief of the Arab League, and Hamdeen Sabbahi, the leader of the nationalist left wing. Moussa and Sabbahi were presidential candidates in June elections that Morsi won.

The National Salvation Front alleged frauds and irregularities in the December 15 and 22 split referendum on the new charter, which Morsi signed into law this week.

It accuses Morsi's Muslim Brotherhood of wanting to use the constitution to introduce creeping strict Islamic sharia law.

Abdallah called on Justice Minister Ahmed Mekki to name an investigating magistrate for the probe, which would examine suspicions of "inciting for the overthrow of the regime".

Morsi on Wednesday hailed the adoption of the new constitution with 64 percent of the votes in the referendum, though turnout was a low 33 percent.

Within two months, Egypt has to hold legislative elections to choose a parliament to succeed the one dissolved by the constitutional court in June. The opposition parties in the National Salvation Front coalition are considering competing in the elections on the same ticket.

Trying to eliminate his opponents. I hope it sparks another revolution.

Ya but when Morsi was elected he won with a slim majority plus a good turn out then.... These opposition guys lost ... Now the referendum on the constitution was different and maybe only 33% showed up because the rest were sick of elections every next day... I would be.

I think it's the other way around the opposition is in bed with Zionists.

dear GOD no more Zionists excuse! I'm so sick of it. is there nothing else you can deduce from anything other than the boggie man is in on it? grow up! or at least when you talk to me, talk like a grown up or don't waste my time.

This is anticipated, not surprising, not different from the other Arabs behaviour. The winner kills the looser. Democracy does not exist in their dictionary and culture. Soon the Capital of Egypt will be Riyad

This is the well travelled road all dictators take. President grants himself enormous powers. They draft a constitution that further serves their power. They appoint followers to high level posts and start prosecuting the opposition. They are doing to the opposition what Mobarak (and before him Sadat) did to them. Shame on him for taking Egypt down this road, he will end up paying the price for his arrogance and so will Egypt.