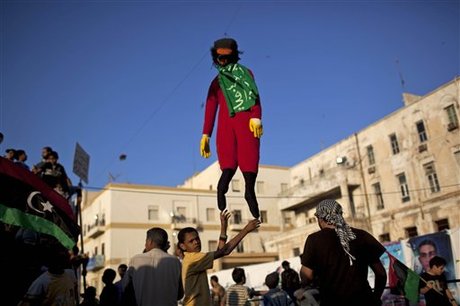 Russia on Tuesday hosted an envoy of Libyan leader Moammar Gadhafi, telling Tripoli to obey a U.N. resolution on Libya as Moscow seeks to position itself as a mediator in the conflict.

The visit to Moscow by Mouhammad Ahmed al-Sharif, general secretary of the World Islamic Call Society, the Libya-based group founded by Gadhafi, comes as Russia is also preparing to hold talks with rebels fighting the regime.

"We raised the issues that directly come out of our principal position aimed first and foremost at urgently ending bloodletting in Libya," Foreign Minister Sergei Lavrov said after talks with al-Sharif.

"We raised an issue about the need for the Libyan leadership to explicitly embrace and begin the implementation of the U.N. Security Council resolutions in full," Lavrov said.

"These resolutions demand that any use of military force against peaceful civilians be stopped."

Moscow, which has been strongly critical of the international campaign against Gadhafi's regime, had agreed to talk to both Gadhafi's envoys and rebels who had also planned to come to Moscow but had to delay their trip.

Lavrov said the envoy told Moscow that Tripoli was ready to cooperate if rebels and NATO stopped hostilities too.

"The answer that we heard could not be called negative," Lavrov said.

"The main thing right now is to agree terms and conditions of a ceasefire," he said.

"This will create a firm foundation allowing at the next stage to begin national dialogue ... about the country's future, the future of a new Libya."

Lavrov said Libya's rebels had to postpone their Russia visit for "technical reasons," adding Moscow would be awaiting their arrival.

In March, Russia abstained from the U.N. Security Council resolution on Libya that essentially authorized military action. But since then, the Kremlin has accused the West of exceeding the U.N. mandate and getting entangled in a full-blown military operation in Libya.

The Libya envoy's visit to Moscow comes as the International Criminal Court prosecutor sought Gadhafi's arrest for crimes against humanity and NATO jets continued to pound the country.

Parts of Tripoli have been targeted almost daily by NATO-led strikes launched on March 19 after a U.N. resolution called for the protection of civilians from Gadhafi's regime.

Moscow has refused to accept the rebels as a legitimate power in Libya and still has formal ties with the Gadhafi regime.

While some say Moscow's efforts to mediate the conflict are doomed, others counter that mediators should exhaust all diplomatic efforts to prevent the war from spilling over the borders.

"It is important to try to use all possible political methods to find a way out of the deadlock," Alexander Tkachenko, head of the Centre for North African and African Horn Studies at the Institute of African Studies, told Agence France Presse.

"A bad peace is better than a good war."

Competing with Western countries for access to the resource-rich country, Moscow used to accommodate nearly all Gadhafi's whims.

When the Libyan leader arrived in Moscow for his first visit to post-Soviet Russia in 2008, Moscow let him pitch his Bedouin tent inside the Kremlin walls in a break from security protocol.