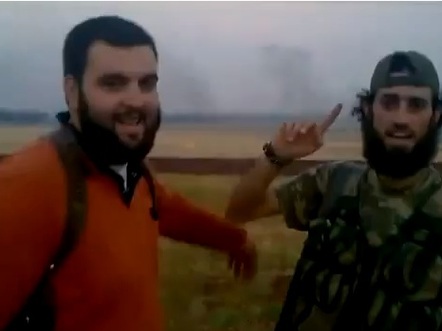 Syrian jihadist group the al-Nusra Front, blacklisted by Washington as a terror outfit, has accused the United States of seeking to keep President Bashar Assad in power.

"The continued U.S. and international support for prolonging the regime's lifespan by giving extensions (for a political transition), sending observers and trying to negotiate peace is clear to everyone," the group's leader, Abu Mohammed al-Jawlani, said in a voice recording posted online.

"The United States is expressing its failure in the region by putting the al-Nusra Front on its terror list (merely) for helping the (Syrian) people," he added.

Jawlani said the blacklisting had prompted "popular anger among Muslims," including "condemnation from 100 organizations."

In his message, entitled "People of Syria, we sacrifice our souls for you," Jawlani told Syrians: "We have offered you our blood in defending your religion and your lands, and will continue to sacrifice ourselves one after the other."

Al-Nusra has claimed responsibility for the majority of deadly suicide bombings in Syria's 21-month conflict, including an attack on the interior ministry in Damascus on December 12.

Its fighters have also played a major part in battlefield gains made by the rebels in the northwest in recent months.

The mainstream armed opposition National Coalition, recognized by Washington as sole legitimate representative of the Syrian people, called on December 12 for a review of the U.S. blacklisting.

AS a Syrian citizen we don't want radical Islamist like you al Jawlani, to run our country, do us a favor and go back to your masters homeland