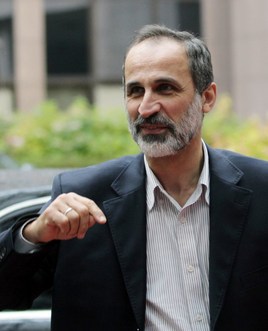 The head of Syria's mainstream opposition National Coalition on Friday rejected an invitation by Moscow for talks to find a solution to the 21-month-old conflict, accusing Russia of interference.

"We have said frankly that we will not go to Moscow," Ahmed Moaz al-Khatib told al-Jazeera television.

Khatib said Russia should apologize for "interfering" in Syrian affairs, condemn "massacres" committed by the regime and issue a "clear call for the departure of President Bashar Assad."

If these conditions are met, he said, talks could be held with the Russians in an Arab country.

Earlier Russia, which has not joined much of the West in recognizing the National Coalition as the sole legitimate representative of the Syrian people, invited Khatib for talks in Moscow or a regional capital.

This guy is the best.

you are the one talking about khilafa not him...besides this, the idiot that you have in your picture (nascrocrap) supports something called wilayat elfaqeeh and nwo you're talking against the khilafa? what's wrong with YOU?

bashar does not want to 'sit down', if it comes to him he would kill 1 million syrians to 'sit down' in power and bring his son hafez after him, 20 months and his war machine is going full speed and you're still not convinced?? ya zalami he used everything from migs to scud missles, 7aje man.. second, quit using the wahabi line it does not sell, aren't there thuosands of she3a lebanese working in KSA? time to be rational and think of masla7at lebanon, wouldnt you rather see hariri and nasrala make peace than see nasrala and suni jihadis go to war?

When asked why he is rejecting talks, Ahmed Moaz al-Khatib stated that he already bought the rope the Syrian people are going to use to hang bashar and it would be such a waste not to use it now. Especially after 45,000 people lost their lives because of the low life giraff.

this is who they're scaring us of taking control in Syria? I say a million welcomes to Moaz alKhateeb.

Russia can say good bye to the Tartous base and any possibility to drill for oil in the Med off os Syria.

Russia backed the wrong giraffe in the race.

I love it....he is telling the Russians to apologize for interfering in the affirs of the new head of state in Syria. Bashar will be screaming.

You call Morsi zionist too because he is not allied with Iran? at least he was able to recently stop the Air attacks on the heads of the Palestinians unlike your claim that the rocks/rockets caused Hamas to win the war. What's the difference between the Giraffe/MIG and Netanyahu/F16 dumping bombs from the air on Gaza or Aleppo?

by the way, Israel is building a new wall with Syria NOW after it became clear that ASSad is going to fall..ever ask yourself why that is?

are you trying to imply that Mubarak was better than Morsi? That's just about the stupidest thing I ever heard.

Moaz khatib is a good person my friend. Hold your horses and learn more about him before you say stuff. In fact he is moderate and very inclusive. Did you know that israel is now building a 90 km wall in the golab heights? shouldnt this be an eye opener to you?? for over 40 years they were not scared of the muqawim bashar and now all of a sudden they are worried about the changes in Syria.

Mashallah, Syrians are tough people. May Allah bless them

May Allah make those who die by knife die fast and send them to Jannah and destroy Irani Shia and Iraqi Shia and Lebanese Shia. Shia are enemies of Allah

Why are the Russians and Brahimi so keen on peace talks? It's too late. They haven't reached this far to stop now. It will continue. 45 or 100.000 dead, Assad will go.

shab its okay , because your relatives aren't dying
I hope one day you taste the same flavor

They did under Assad. And if Syrians stop now for som false peace treaty, then yours and mine will all have died in vain.

He resistance.....the Hezz and Syria murder M14, deal drug, steal cars, steal from the casino, steal from the port.....you name it. I will take my chances with the other guys after seeing the devil in the black turban.

Moscow should bow infront of US, Qatari and S. Arabian heads and appoligize
I think someone is pulling Khatibs chains

Moscow has been supplying ASSad with weapons and "experts" to kill his people, it's like Iran wanting to host talks...no one in their right mind would do it.

that's not the topic at hand, let's assume that Saudi Arabia is supplying weapons, would Saudi Arabia be neutral then? Your argument is futile and irrelevant.

Abraham do you think shab or any other lebanese didn't taste the same flavor at the hands of the Syrians? Your comment is both insensitive and degrading to all of the lebanese!