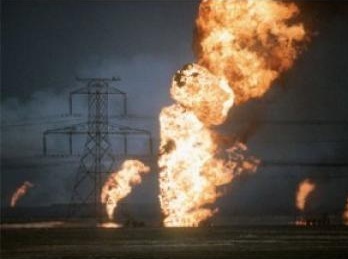 "A team of technicians had managed to repair the oil pipeline in the afternoon, following mediation by tribal chiefs that allowed them access to the site," an engineer said, speaking on condition of anonymity.

Marib is a major al-Qaida stronghold.

Attacks on oil and gas pipelines by al-Qaida militants or by tribesmen seeking to extract concessions from the central government are common in Yemen -- an impoverished country that produces about 300,000 barrels of oil a day, mostly for export.

A tribal source told AFP that the offensive was targeting prominent figure Salah bin Hussein al-Dammaj, who has allegedly blown up the pipeline several times to pressure the authorities to pay him 100 million riyals ($480,000) in compensation for land he claims was taken from him in Sanaa.

The 320-kilometer (200-mile) pipeline carries oil from Safer oilfields in Marib to an export terminal on the Red Sea. It carries around 180,000 barrels per day.

According to official figures, lost production because of attacks on pipelines in the east cost the government more than $1 billion dollars in 2012, while oil exports fell by 4.5 percent.

In July, Petroleum and Minerals Minister Hisham Abdullah said Yemen had lost more than $4 billion (3.1 billion euros) in revenues since February 2011 due to such attacks.