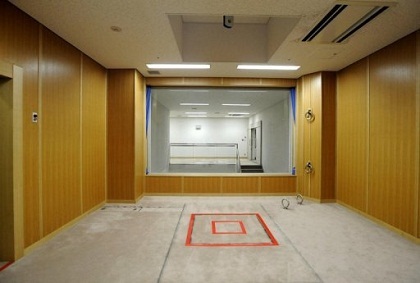 Death row inmates in Japan want to be told of their execution in advance, instead of on the day they are to be hanged, a lawmaker's survey said.

A majority of those sentenced to die would also like the present method of administering punishment to be reviewed, with the largest bloc saying their preferred choice would be lethal injection.

The survey was carried out by Mizuho Fukushima, deputy chairwoman of the nonpartisan Parliamentary League for the Abolition of the Death Penalty, from September to November and was published Friday, Kyodo News reported.

It covered 133 people on death row, two of whom were executed at the end of September, taking this year's total in Japan to seven.

Of the 78 who replied, 51 said they wanted to know ahead of time that they would be put to death, with opinions varying from a day to a month in advance. Many said they wanted the chance to say goodbye to loved ones.

More than half said they wanted the state to think again about the method of execution, with 25 saying they wanted to die by lethal injection, the survey said.

Apart from the United States, Japan is the only major industrialized democracy to carry out capital punishment, a practice that has led to repeated protests from European governments and human rights groups.

International advocacy groups say the system is cruel because death row inmates can wait for their executions for many years in solitary confinement and are only told of their impending death a few hours ahead of time.

On December 20, a record 111 countries voted for a moratorium on capital punishment at a keynote U.N. General Assembly human rights meeting.

Japan, where the punishment enjoys widespread public support, was one of 41 nations that voted against the motion, putting it alongside China, Iran, North Korea and the U.S.

No-one was executed in Japan for the 20 months to March 2012, leading to hopes among campaigners that the country was following the international trend of a self-imposed moratorium.

In a legal quirk, executions are banned over the New Year period, as well as on weekends and public holidays.