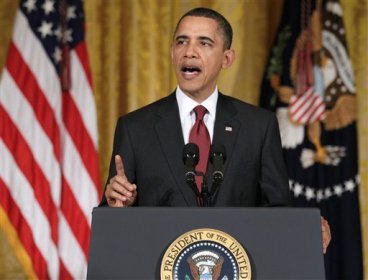 Last minute talks stalled Sunday between top U.S. political leaders aimed at averting a fiscal calamity due to hit within hours, as Democrats and Republicans blamed each other for a lack of progress.

Top Democrats and Republicans groped for a compromise before a punishing package of government spending cuts and tax hikes come into force on January 1 which could roil global markets and send the U.S. economy back into recession.

Senate Republican minority leader Mitch McConnell warned that, despite through-the-night talks, negotiators were still a long way from success, as they raced against the ebbing 2012 calendar in search of a compromise.

McConnell said he had got no response to a "good faith offer" to Senate Democrats, and called on his old friend and sparring partner Vice President Joe Biden to join the fray in the hope of breaking the stalemate.

Senate Democratic leader Harry Reid agreed talks were at a standstill, raising the prospect that Americans will ring in the New Year with no deal to avert a budget disaster known as the "fiscal cliff."

"This morning, we have been trying to come up with some counteroffer to my friend's proposal," Reid told the Senate. "We have been unable to do that."

Earlier, Democratic President Barack Obama, accused Republicans of causing the mess, saying they had refused to move on what he said were genuine offers of compromise from Democrats.

"Now the pressure's on Congress to produce," Obama said, in an interview with NBC's "Meet the Press" that was recorded on Saturday, a day after he expressed modest optimism that a deal could be reached.

Obama said it had been "very hard" for top Republican leaders to accept that "taxes on the wealthiest Americans should go up a little bit, as part of an overall deficit reduction package."

But Republicans were irked by Obama's tone and matched his accusations. The ugly mood could suggest that hopes for a consensus are fading -- or be the kind of political-base pleasing rhetoric that sometimes heralds a compromise.

"We've been reasonable and responsible. The president is the one who has never been able to get to 'yes.'"

If no deal is reached, a package of tax cuts for all Americans that was first passed by former president George W. Bush will expire on January 1.

All American workers will see their own paycheck hit and the broader economy will be hit by massive automatic spending cuts across the government.

Experts expect the U.S. economy could slide into recession if the standoff is prolonged, in a scenario that could cause turmoil in stock markets and hit prospects for global growth in 2013.

The president won re-election partly on a platform of raising taxes on the rich, but Republicans who run the House of Representatives oppose tax hikes as a point of principle and claim Obama is addicted to runaway spending.

Republican Senator Lindsey Graham, speaking as his party bosses huddled with senior Democrats in search of a deal, predicted a short-term agreement would emerge, but would only postpone the budget battle by a few months.

"Hats off to the president. He stood his ground. He's going to get tax rate increases," Graham told Fox News Sunday.

"The sad news for the country is that we have accomplished little in terms of not becoming Greece or getting out of debt."

Any deal must pass the Senate, before going to the House, where such is the power of the conservative bloc of the Republican Party, it is unclear whether any solution backed by Obama can win majority support.

If leaders fail to find an agreement, Obama has demanded a vote on his fallback plan that would preserve lower tax rates for families on less than $250,000 a year and extend unemployment insurance for two million people.

Should Republicans block that attempt, they would face being lambasted by angry voters who see their taxes shoot up -- an unenviable political plight.

It is a measure of the dysfunction in Washington, where the political center has disappeared and the two parties share power, that the fiscal cliff was set up by both sides precisely in order to avoid such a last-minute frenzy.

The combined whack from tax hikes and cuts to defense and social programs was supposed to be so punishing that it would force the hands of both sides to make long-term compromises on tax and spending.

But the threat has failed, and any deal that emerges now will simply set up new rows over the tax code and reform of social programs that are helping to inflate U.S. government debt, as the annual deficit runs at over $1 trillion.

Republicans are already promising to use Obama's request to raise the $16 trillion ceiling on government borrowing, due to be hit by Monday, over the next few months to demand concessions from the president on spending.