Airport in Syria's Aleppo Closed due to Rebel Attacks 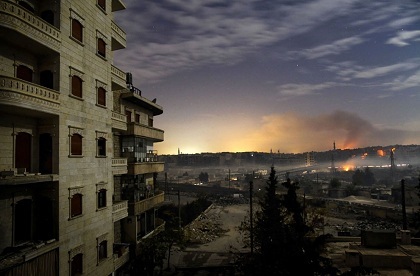 The international airport in Syria's second city of Aleppo has been temporarily closed due to repeated attacks by rebel fighters, an airport official said on Tuesday.

"There have been continued attempts by opposition militants to target civilian aircraft, which could cause a humanitarian disaster," the official told AFP on condition of anonymity.

The airport's authorities said the closure was due to maintenance work on the runway and other facilities on the ground.

The official said the critical transportation hub would be closed for a "very short period of time" while the army worked to regain control of surrounding areas where large numbers of rebels have set up base.

Fighting in Aleppo, located in the largely rebel-held north of Syria, has been at a stalemate for months since opposition fighters launched a massive assault on the former commercial hub in mid-July.

Hopefully it will not open before the Syrians gain their freedom.

Mohammad and every commentator you must be very primitive and your comments seem to reflect the lack of human rights and lack of education that your parents probably couldnt provide to you. Because such comments reflect that those supporters of that so called Revolution are as criminal as the Regime that you claim that is criminal. if you consider targeting civilian aircrafts is a honor for those freedom fighters than you and all those who are hoping for FREEDOM should go have a course in Law and Political science and maybe some CIVIC education of international relation because you need to learn what is the meaning of Freedom and what are the limits and boundaries. Unless you consider freedom is just a word that reflects the right to do whatever they want than you and all those supporters of FSA and even those of the Regime who have no limit should be exiled to the Amazon.

The revolution will succeed, but Syria will become rubble pretty much like afghanistan after kabul fell to the rebels in 91.. that is the only price that israel and the US accept for losing the Assad family, the true gaurdians of the golan heights. In few years we will see US & Israeli drones chasing jihadis around Syria. For those who were brainwashed to think that the US was anti-bashar, i refer you to clinton's words when the revolution started in dar3a "bashar is a reformer" she said, i also refer you to Madeline Albright meeting with bashar during hafez assad funeral when she explicitly supported bashar on a "peaceful transition" to presidency.

yes isn t it ironic that M8 sides with USA and israel to keep bashar in power! lol!!!

Damascus airport shut down, now Aleppo. When the FSA shuts the road from the coast through Homs to Damascus he will be cu off from re-supply. the end is near for ASSad. The Hezz and Iran will be on the losing side of a war.

Syria deserves worst than this, Syria shouldnt exist on the map, bunch of stupid people, they deserve that , " what goes around, comes back around" let them burn all, back stabbers and bunch of secret services

its known that the "rebels" of aleppo are linked to jabhat al nusra, which is an al qaida based organization of radical jihadists. nothing to get excited over, really.