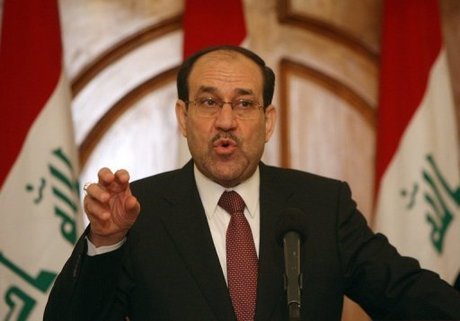 Iraqi premier Nuri al-Maliki looked to head off protests in Sunni areas of the country on Tuesday with a prisoner release even as he threatened to use state resources to "intervene" to end the rallies.

The move came as powerful Shiite cleric Moqtada al-Sadr voiced support for the demonstrations and predicted an impending "Iraqi spring" as ongoing rallies blocked off a key trade route connecting Iraq to Syria and Jordan for a 10th successive day.

Maliki, who is Shiite, ordered the release of more than 700 female detainees, a key demand of demonstrators, the official appointed to negotiate with protesters, told AFP.

"The prime minister will write to the president to issue a special amnesty to release them," Khaled al-Mullah said.

Mullah said of 920 female prisoners in Iraqi jails, 210 had been accused or convicted of terrorism-related offenses and could not be released. But, he said, they would be transferred to prisons in their home provinces.

The remaining detainees, convicted on lower-level charges, would be released, he said. He did not give a time-frame for the process.

On Monday Maliki warned protesters blocking the highway to Syria and Jordan that his patience was running thin.

The demonstrators should "end their strike before the state intervenes to end it," he said in an interview with the state broadcaster Iraqiya, in an apparent reference that he could order the use of military force.

Addressing the protesters he said: "I warn you against continuing (blocking the highway), because this is against the Iraqi constitution.

"We have been very patient with you."

The rallies began on December 23, sparked by the arrest of at least nine guards of Finance Minister Rafa al-Essawi, a Sunni Arab and a leading member of the secular Sunni-backed Iraqiya bloc which, while part of Maliki's unity government, frequently criticizes him in public.

Protesters in mostly Sunni areas of Iraq's west and north have alleged that the Shiite-led authorities use anti-terror legislation to target their minority community.

The rallies were given a boost on Tuesday, when powerful Shiite cleric Moqtada al-Sadr backed the demonstrations, and predicted that "an Iraqi spring is coming, if things stay the way they are."

"The demonstrations will continue as long as policies do not satisfy the people," he said at a news conference at his home in the central Iraqi city of Najaf.

Sadr's movement counts 40 lawmakers and five ministers among its supporters, and his Mahdi Army was once one of the most feared militias in the country, though it has since sworn off violence.