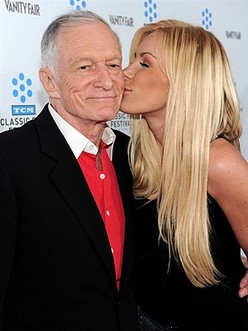 Playboy magazine founder Hugh Hefner has tied the knot for the third time, marrying a former Playmate 60 years his junior in an intimate New Year's Eve ceremony at the Playboy Mansion.

Hefner, 86, and Crystal Harris, 26, announced the nuptials on their Twitter feeds -- @hughhefner and @crystalhefner -- and posted pictures of the wedding.

"Happy New Year from Mr. and Mrs. Hugh Hefner!" Hefner said in a message accompanied by a picture of the octogenarian sporting purple pajamas and a captain's hat and the blonde Harris in her wedding dress.

Harris posted a picture on her own Twitter feed of the ceremony conducted under an archway of red, pink, purple and white flowers.

"Today is the day I become Mrs. Hugh Hefner. Feeling very happy, lucky, and blessed," she tweeted shortly before the wedding.

Hefner and Harris had planned to marry in 2011 but she called off the ceremony at the last minute.